The three executive orders President Biden signed, which are instructions to executive agencies to create and implement polices based on federal immigration law, fall under three themes:

Broadly, the orders mark a complete break from the previous administration’s immigration policies. They institute reviews of President Trump’s signature measures to initiate their elimination and address their impact on immigrants. The orders also use and reinforce existing legal channels to provide protection to humanitarian migrants, strengthen the U.S. immigration system’s ability to process green card and naturalization applications, and integrate immigrants.

The family reunification task force executive order aims to reunite Central American families that were separated at the U.S.-Mexico border in 2018 through the zero-tolerance policy. The order creates a multi-agency task force that will develop recommendations for identifying and reuniting these families, including exploring which legal channels the U.S. government can use to meet these goals. The task force will also provide recommendations to prevent the U.S. government from adopting measures that lead to similar outcomes in the future.

The comprehensive regional framework executive order establishes the foundations for managing migration between the Northern Triangle and the U.S.-Mexico border. It calls for the development of policies that target the root causes of migration and strengthen the humanitarian protection systems in Mexico and the Northern Triangle Countries. It also creates legal channels for Central American migrants to seek protection in the U.S. The order also calls for border policies like the Migrant Protection Protocols to be reviewed, which will assist with the administration’s process for ending these measures this year.

Finally, the last executive order  seeks to improve the legal immigration system and integration of immigrants. It requires the U.S government to assess how it can eliminate backlogs and delays in the processing of green card and citizenship applications. It also creates the Task Force on New Americans to develop federal immigrant integration measures. Finally, the order reviews the Trump Administration’s public charge rule, which limited green card access to migrants who have used – or may use – public benefits. This step will then initiate the Biden Administration's elimination of the public charge rule.

How can the executive orders be strengthened?

Although the orders advance policies that can improve the management of immigration in the United States and the region between the Southwest Border and the Northern Triangle, the regional executive order overlooks some important policy areas essential to meeting these goals.

First, the document doesn’t outline the role enforcement plays in managing migration in the region. For instance, the order doesn’t instruct the Department of Homeland Security to work with its law enforcement counterparts in Mexico and the Northern Triangle to adjust existing law enforcement agreements and create new ones to support this new framework while continuing to target security threats. It also doesn’t call for assessing the enforcement and non-enforcement needs of U.S. Customs and Border Protection agents at the border, even though it initiates the creation of protocols to surge resources to the border.

The order overlooks how legal work channels can help manage migration from Central America. Although many migrants that arrived at the Southwest border in 2018 and 2019 sought protection, some used asylum to work in the United States. Ordering the expansion of existing programs in Central America such as the H-2A temporary agricultural program and developing recommendations for new legal channels would create alternate routes to work in the United States. The order could also include provisions that examine how international trade can help target the root causes of migration in the region.

The Biden Administration addresses some of these points in the U.S. Citizenship Act of 2021, its comprehensive immigration reform bill. The bill allocates funding for smart border technology, creates a transnational anti-gang task force, and modernizes ports of entry at the U.S.-Mexico border to promote trade and strengthen security in the region. However, congress is the only entity that can create these channels. It needs to completely address the aforementioned points in the current bill or new legislation, especially with creating legal pathways based on recommendations from the executive branch.

What are the next steps the Biden Administration will take to implement these orders?

Broadly, the three orders instruct all executive agencies that oversee the U.S. immigration system to review existing regulations and agency guidelines and develop new ones to implement their mandates. Although some segments of the immigration debate called on President Biden to enact these measures immediately, the orders require the tasked agencies to begin implementing their mandates within 90 to 270 days. As a result, we will see the initial waves of new measures arrive later this spring as the agencies go through the formal policymaking process.

However, litigation against these policies could impact their implementation. During the Obama and Trump eras, critics of the administrations’ respective immigration policies used litigation to derail or stall the implementation of their executive orders and regulations. We had a preview of this dynamic when Texas Attorney General Ken Paxton successfully secured a temporary restraining order against a Biden Administration memorandum that paused deportations for 100 days. Although the case will continue through the courts, the lawsuit shows that the courts will continue to play a major role when it comes to implementing the policies from these executive orders.

Cris Ramón is a consultant with the Bush Institute-SMU Economic Growth Initiative. 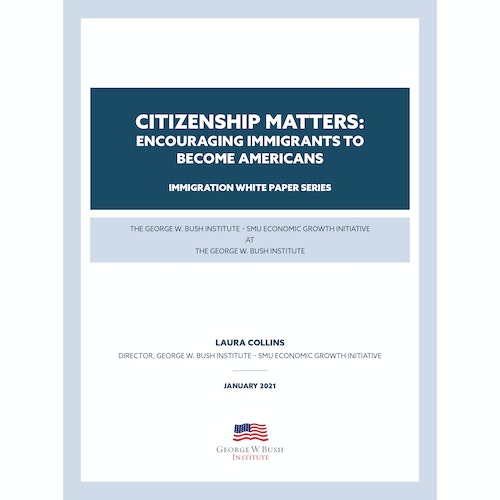 Citizenship Matters: Encouraging Immigrants to Become Americans Naturalization is not just about the immigrants. It is about the contributions and vitality the United States gains each time an immigrant becomes a citizen. Learn more