The NBA can Dunk on Racial Injustice at Home and Abroad

The NBA has rolled out a new policy allowing players to showcase messages on their jerseys supporting racial equality. The Bush Institute's Chris Walsh writes that while it has mostly been used to draw attention to domestic injustices, it also gives the NBA the chance to right an international wrong by showing solidarity with China’s Uighur people, a Turkic Muslim minority in Xinjiang province.

Basketball’s back, and with it has come a new opportunity for the NBA to show that its wokeness doesn’t end at America’s borders.

The league has rolled out a new policy allowing players to showcase messages on their jerseys supporting racial equality. While it has mostly been used to draw attention to domestic injustices, it also gives the NBA the chance to right an international wrong by showing solidarity with China’s Uighur people, a Turkic Muslim minority in Xinjiang province.

The Uighurs and the NBA have history.

China is a multibillion-dollar market for the NBA, and the league has come under fire for “turning a blind eye to the discrimination and harassment” of Uighurs when it ran a youth academy in the minority group’s home province. The allegations, published by ESPN, came from an NBA employee at the site. Another compared the region to “World War II Germany.” The league claims it has since disassociated from the Xinjiang academy, but some speculate it did so quietly to spare the Chinese Communist Party (CCP) unwanted attention over the Uighurs.

But what the CCP has done to the Uighurs is arguably one of the worst examples of racial injustice in the world today. The CCP has imprisoned an estimated 1 million Uighurs in concentration camps to stamp out their identity, faith, and culture. The details are chilling and suggest genocidal intent.

Beijing’s systematic effort to shrink the Uighur population has utilized mandatory pregnancy checks, forced implementation of intrauterine devices, forced abortions, and sterilization, according to research by Adrian Zenz, one of the world’s leading scholars on China.

Birthrates in the Uighurs’ home province of Xinjiang dropped 24% over the past year, while they fell 4.2% nationally. The CCP has relaxed restrictions on how many children members of the country’s Han Chinese majority can have, but that doesn’t seem to apply to Uighurs. Even more alarming, birthrates in the Uighur strongholds of Hotan and Kashgar plunged 60% from 2015 to 2018. Those figures, coinciding with policies that include mass incarceration in concentration camps and policing Uighur pregnancies, can’t be coincidence.

Gulnar Omirzakh, a Uighur woman who was forced to attend re-education classes for having too many children, expressed such fears to the Associated Press: “God bequeaths children on you. To prevent people from having children is wrong…They want to destroy us as a people.”

While the NBA refused, the league’s overall response to China (which was set to host a series of exhibition games) was lackluster from a democratic-values perspective. Even the league’s biggest star, LeBron James, suggested people like Morey were either “misinformed or not really educated on the situation” for voicing support of Hong Kong freedom activists.

American fans took matters into their own hands. If the league and its stars refused to discuss the CCP’s human rights abuses in Hong Kong, they would show their support via signs and clothing with messages during games. Remarkably, fans went beyond demonstrating solidarity with Hong Kong. They also displayed signs saying “Google Uighurs.”

Frankly, the NBA owes the Uighurs some recognition of their existential plight by offering public support for racial equality in China. Authorizing a jersey message for players to support Uighurs would be step in the right direction.

While some fans may argue against the NBA promoting any “political” messages, Uighur or otherwise, the reality of the situation is that the NBA is using its platform to champion racial equality and condemn discrimination at home. It might as well take the next step and do so internationally. That should start with the Uighurs.

Perhaps the NBA could act in tandem with the U.S. government to magnify the issue and enhance public consciousness. Supporting Uighurs is one of the few things in Washington that inspires bipartisan action, with Congress passing the Uighur Human Rights Policy Act and the U.S. Commerce Department sanctioning Chinese companies over Uighur human-rights abuses.

It might even provide a unique way to bridge domestic divides over racial equality. That animosity was apparent in a heated exchange between Dallas Mavericks owner Mark Cuban and Senator Ted Cruz (R-Texas). Imagine the goodwill and publicity that Cuban and Cruz might generate if they, putting aside disagreements, jointly reaffirmed the NBA’s commitment to U.S. racial equality and expanded its jersey messages policy to include support for Uighurs.

Would the NBA take a serious financial hit in China? Likely. But supporting racial equality in both countries would show consistency and moral courage. Sure, that’s easy for me to say as I’m not risking profit or access to lucrative markets, but this is the standard the NBA set for itself when it permitted these jersey messages. It’s also the right thing to do.

Besides, American fans have demonstrated they care about the Uighurs and human rights in China. It could be an opportunity for the NBA to intensify brand loyalty at home, reaffirm the best of liberal democratic values, and present itself as an exemplar of corporate social responsibility. At the very least, the league will probably earn new and appreciative fans among the Uighurs who are fighting for their existence.

The NBA can Dunk on Racial Injustice at Home and Abroad

Keep Lebanon in Your Thoughts Farhat Popal on August 20, 2020

The Bookshelf: “News Deserts” Threaten our Democracy by William McKenzie

The Bush Institute's Christopher Walsh talks with a member of the Human Freedom Advisory Council at the Bush Institute, David Kramer, about current headlines out of Belarus and Russia. 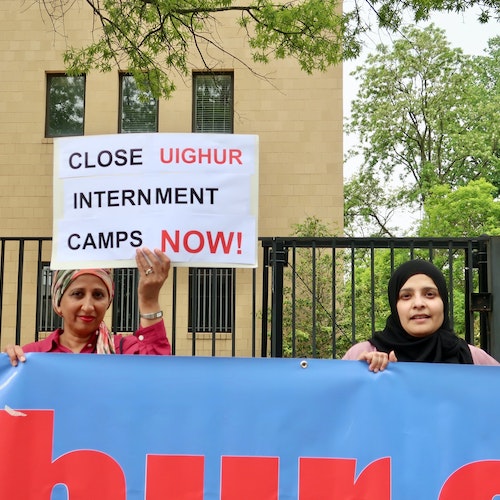 The Uighurs—China’s Persecuted Minority Bob Fu was a leader in the student democracy movement at Tiananmen Square in 1989, a Christian pastor and founder of an underground church in China, and former Chinese prisoner of conscience. We spoke with him about the Uighurs— a Turkic people in Central and East Asia. Read the article