Press Freedom is Democracy’s Canary in the Coal Mine

The Bush Institute's Chris Walsh points to the experience of countries like Venezuela to show why protecting freedom of the press is central to protecting all freedoms.

Eternal vigilance is the price of liberty. While there are different ways a democracy can practice vigilance — from citizens voting, to protesting injustices, to fostering civil society — press freedom may be the most integral. A free and vibrant media provides an entry point and platform for citizens to stay informed, engage in their communities, consume and civilly debate ideas, and hold government accountable for its actions.

In fact, the health of independent media within a liberal democracy may be akin to the old practice of placing a canary in a coal mine. If a toxic atmosphere kills the “canary,” there’s serious trouble.

In fact, the health of independent media within a liberal democracy may be akin to the old practice of placing a canary in a coal mine. If a toxic atmosphere kills the 'canary,' there’s serious trouble.

Consider a recent interview with Venezuelan freedom advocate Rodrigo Diamanti. Responding to a question about what democracies could learn from Venezuela’s backslide into authoritarianism, he said, “By controlling freedom of the press and freedom of information, [Hugo] Chavez and his government could continue doing other changes: destroying the judicial system, imprisoning political opponents, and even torturing people. …The most important factor to defend in a democracy is freedom of press. Once you lose that, you start to lose all the rest of the elements of what makes a democracy.”

While the assault on independent media continues in Venezuela, press freedom faces similar battles elsewhere. A recent Freedom House report says that, “media freedom has been deteriorating around the world over the past decade.”

There are troubling examples of established and newer democracies clamping down on media. According to Freedom House, nearly 20 percent of the countries ranked “free” have seen press freedom decline over the past five years. They attribute this, at least partly, to “populist leaders” who “have overseen concerted attempts to throttle the independence of the media sector.”

Look at the Philippines, where journalist Maria Ressa’s conviction on dubious libel charges has intensified concerns over democracy’s future under President Rodrigo Duterte. In Hungary, Viktor Orban has manipulated the system to increase his control over the country’s news agencies and silence critics. And in Turkey, President Recep Tayyip Erdogan prosecutes anyone who insults him via old or new media.

Of course, press freedom in a democracy doesn’t just mysteriously erode. The people must consent to it explicitly or implicitly by voting for or excusing the actions of leaders who disregard or degrade democratic institutions like a free press. Such leaders gain traction by exploiting public frustration with the existing system.

Social scientists Yascha Mounk and Roberto Foa offer evidence that frustration with democracy is both real and widespread. According to research, an overall majority of people living in democracies are dissatisfied with their system of government. In fact, as Mounk and Foa reveal, “public confidence in democracy is at the lowest point on record in the United States, the major democracies of Western Europe, sub-Saharan Africa, and Latin America.”

Moreover, recent experiences in the United States, Brazil, and the United Kingdom suggest that when people feel dissatisfied, unheard, and left behind, they will seek unconventional means to shake up or even tear down the existing system.

Christopher Nolan’s Dark Knight trilogy helps conceptualize this experience. Gotham City, once a bastion of idealism and prosperity, descends into crime, corruption, and inequality over decades. It becomes a powder keg of dissatisfaction ignited by Batman’s vigilantism. In the upheaval, space opens for anarchists, like The Joker, and strongmen, like Bane, to exploit society through fear or by smashing the rule of law under the guise of giving Gotham back to the people.

These themes of dissatisfaction, broken systems, and exploitation would likely resonate with many Americans at this moment in our history. People are frustrated and polarized. For these reasons, U.S. democracy needs dependable, independent media that informs the public in tense times.

Unfortunately, media credibility in the United States is increasingly determined along political lines. It won’t surprise you that polls show Democrats place greater trust in CNN and less in Fox News, while Republicans do the opposite. The same polls also show that not one news outlet earns more than 50 percent of the overall public’s trust.

What’s more, distrust of media outlets has increased over the past five years, particularly among Republicans. One must wonder how heavily continuous disparagement of the press as “fake news” and “the enemy of the people” weighs on those perceptions. Sadly, it’s not difficult to imagine American press freedom facing greater challenges if public opinion continues along this path.

Certainly, citizens should demand high journalistic integrity, but media’s job is to scrutinize. That scrutiny benefits the public by providing them information to hold government accountable and to become better citizens. And if our leaders disagree with the media’s assessment on an issue, they have platforms to engage, respond, and persuade without degrading press freedom.

As Americans, it’s in our best interest to support media institutions that are independent, robust, and free. They’re essential to the vigilance required for preserving our cherished liberty. If you doubt that, look at the consequences of undermining press freedom in Venezuela, the Philippines, Hungary, and Turkey. If that “canary” in the coal mine dies, we’re in danger.

Press Freedom is Democracy’s Canary in the Coal Mine

This Democracy Talks series goes in-depth on these destabilizing forces in the world today. Read more
The Four Horsemen of the Apocalypse: Populism, Nativism, Isolationism, and Protectionism
Democracy Mobilizes the Better Angels of Our Nature
Europe's 21st Century Challenge is Defining "The People"
No Nation is an Island
This is What Democracy Looks Like
Making Democracy Deliver for All is the Antidote to the Dangers of Populism
Emerging Democracies Combat Isolationism, Nationalism, and Identity Issues
Opposing Populism and Nativism in Venezuela – At a Cost
Americans Want Fairness, Gratitude, and Genuine Friendships

The Bookshelf: “News Deserts” Threaten our Democracy by William McKenzie

The Bush Institute's Christopher Walsh talks with a member of the Human Freedom Advisory Council at the Bush Institute, David Kramer, about current headlines out of Belarus and Russia.

The NBA has rolled out a new policy allowing players to showcase messages on their jerseys supporting racial equality. The Bush Institute's Chris Walsh writes that while it has mostly been used to draw attention to domestic injustices, it also gives the NBA the chance to right an international wrong by showing solidarity with China’s Uighur people, a Turkic Muslim minority in Xinjiang province. 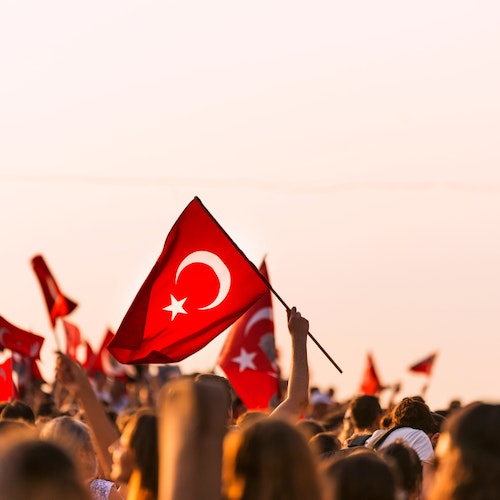 Reliable Sources Keep Us Informed — and Guard against Misinformation Senior Editorial Advisor William McKenzie shares his top picks for the most reliable sources for COVID-19 news. Read the article