Extending the right hand of fellowship is the most important role religious institutions can play as our nation continues to define and refine its immigration policies.

Julissa Vargas earned her degree in criminal justice from the University of North Texas at Dallas in 2018, becoming the first in her family to graduate from college. Her path to college started long before that, though. Her journey began as a first-grade participant in the Children and Youth Program at The Stewpot, a ministry of the First Presbyterian Church of Dallas that serves individuals and families at-risk of becoming homeless. (Acknowledgement: I volunteer at The Stewpot and serve on its governing board.)

Like many of the other young participants, Julissa began attending weekly Saturday classes at The Stewpot in elementary school. Volunteers tutored her and other students, while providing an opportunity for fun and recreation on Saturdays.

Later, as a high school student, Julissa participated in another Stewpot program that took her and fellow participants on college visits. The trips opened a new realm of possibilities. As she told the STREETZine, The Stewpot’s street paper, “I started to say I wanted to go to college. I heard from others who talked about where they went to college, how you can apply and that there are resources to help you go.”

The instructive point here is that a house of worship became a point of entry into the larger American mainstream for a child whose family immigrated from Mexico. And The Stewpot is hardly the only faith-based institution creating pathways and opportunities for students like Julissa. Across the United States, from fast-growing Hispanic evangelical churches to Islamic centers to Jewish synagogues, religious institutions provide a point of contact through their welcoming work for individuals and families.

Extending the right hand of fellowship is the most important role religious institutions can play as our nation continues to define and refine its immigration policies. They open doors into a wider society through offerings like English classes, tutoring for students, and college visits. As Caroline Brettell, a SMU anthropology professor who studies how civic associations impact assimilation, explains in her Democracy Talks interview, religious institutions are the type of mediating institution that can lead immigrants out into the larger public arena.

Of course, a community of faith is the first point of contact for too many immigrants and refugees along the treacherous and often scorching U.S./Mexico border. Sister Norma Pimentel made TIME’ s list of the 100 most influential people in 2020 for her care of immigrants along that border as Executive Director of the Catholic Charities of the Rio Grande Valley.

Across the United States, from fast-growing Hispanic evangelical churches to Islamic centers to Jewish synagogues, religious institutions provide a point of contact through their welcoming work for individuals and families.

But creating a safe shelter or offering needed services isn’t the only way that people of faith and their institutions create a point of contact for immigrants and refugees. (My colleague Chris Walsh and I heard throughout our interviews for this most recent segment of Democracy Talks interviews how finding a place of contact is crucial for immigrants and their families to start integrating into American life.)  Luma Simms of the Center for Ethics and Public Policy explained how devout believers from other countries, particularly those who left behind overtly religious cultures, struggle to find a connection in a secular society. “When they hit upon a culture that discounts faith, that doesn't want to bring religious principles into the public square, there’s no point of contact there,” Simms observed. She knows this firsthand, being an Iraqi immigrant from a Baghdad home where faith was practiced seriously.

By their very nature, houses of worship in the United States — or any country — can decrease the alienation that devout immigrants may experience. Religious institutions that serve immigrants from their same tradition especially can help faithful newcomers overcome their isolation. In North Texas, for example, the DFW Hindu Temple provides a natural point of contact for Hindus who arrive here as part of North Texas’ large Indian American population. As Brettell wrote in an academic paper, such places provide “bonding social capital.”

Don’t get me wrong: The United States is far better off being a non-sectarian nation. Our secular democracy has helped us avoid ethnic-religious feuds. But even in a non-sectarian society, people of faith belong in the public square. Their presence makes it possible for immigrants with other beliefs to step into that same square.

As we head into an important national debate over immigration policy, we would do well to remember the pivotal role that religious institutions play in providing a welcoming society. They not only help immigrants create community, but they provide a way for immigrants to become part of their new home. Even as we refine our policies, these institutions should remain a key entrée into American life.

Explore challenges to the health of democracy in the Bush Institute's Democracy Talks series. Read more
Creating a Common Narrative in a Diverse Democracy
The Complicated Journey of Becoming an American
Individual Rights Define the American Identity
Becoming a Welcoming Society
Creating Unity in a Diverse Society
Religious Identity's Role in Immigration
How Gender and Technology Impact Migration
America's Democratic Identity Binds Together a Diverse Nation
Making “We” as Big as It Can Be 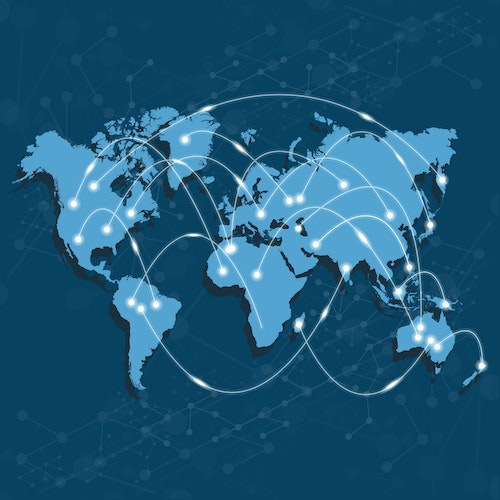 How Gender and Technology Impact Migration Caroline Brettell, University Distinguished Professor of Anthropology at SMU and Chair of Southern Methodist University's Anthropology Department, discusses gender roles in migration. She also reports on the contribution that civic associations make to the integration of immigrants into American life. Read the article