Making “We” as Big as It Can Be

Sanjay Ramabhadran, a partner in VERSA Infrastructure, Anurima Bhargava, a Commissioner on the United States Commission on International Religious Freedom, and Gita Pullapilly, a Hollywood screenwriter, director, and producer, describe how their identities as immigrants or the children of immigrants were shaped. They also discuss how the American identity is always being expanded and refined.

Sanjay Ramabhadran is a partner in VERSA Infrastructure in Houston, where he also serves on the board of the city’s public transit agency. The Texas A&M University graduate has been Chair of Leadership Houston, President of the Texas Lyceum, and President of the Indo-American Chamber of Commerce of Greater Houston.  Anurima Bhargava is the President of Anthem of Us and serves as Vice Chair of the United States Commission on International Religious Freedom. The civil rights advocate is a Presidential Leadership Scholar who previously served in the U.S. Department of Justice’s Civil Rights Division. Gita Pullapilly is a screenwriter, director, and producer in Hollywood. She her husband have won awards from film festivals around the world and organized the U.S.-India Film Initiative. She likewise is a Presidential Leadership Scholar.

In this video interview with Chris Walsh, Senior Program Manager in the Human Freedom Initiative at the Bush Institute, and William McKenzie, Senior Editorial Advisor at the Bush Institute, the three Indian American leaders discuss their experiences as immigrants or the children of immigrants. They describe how their identities were shaped and how the American identity is always being expanded and refined. And they discuss the role of Indian American leaders, including Vice President Kamala Harris.

“There were the usual set of challenges. Making ends meet, finding a campus job, driving a $300 car with the front and rear fender tied to the car to prevent it from falling off. But probably the single biggest challenge, in some ways, was the immigration system. Because it was unreliable, you couldn't really depend on which way it was going, it was uncertain, and was certainly something you couldn't control on your own.”

“I spent a lot of my time growing up, having people coming over and learning about what it meant to be a young person who was the daughter of immigrants from India. People came over and my mom cooked and we had celebrations of Indian holidays that were with people from every background you can imagine. And so that has been my experience of being Indian American. It's been a place where I feel like we've really been able to share who we are, what our background is, what our traditions are with people who can learn about that and have that be very much part of what they think America is.”

“A few minutes before mass starts, a group of white seminarians come up, and they say that we have to move. It's a packed church. There's nowhere to move. So we had to leave. And before I left, I remember looking around the Basilica, and I saw all of these white families, but why did they come and ask us? And I could see the pain and the hurt on my parents' face, but they did not want to make a scene. They didn't want to make an issue of it. They just got up, and we all walked out. But maybe it was a sign from God [because] it was at that moment where I realized that I was going to prove that we as Pullapillys deserved a seat at the table.”

Making “We” as Big as It Can Be

Explore challenges to the health of democracy in the Bush Institute's Democracy Talks series. Read more
Creating a Common Narrative in a Diverse Democracy
Religious Institutions Create a Point of Contact for Immigrants
The Complicated Journey of Becoming an American
Individual Rights Define the American Identity
Becoming a Welcoming Society
Creating Unity in a Diverse Society
Religious Identity's Role in Immigration
How Gender and Technology Impact Migration
America's Democratic Identity Binds Together a Diverse Nation 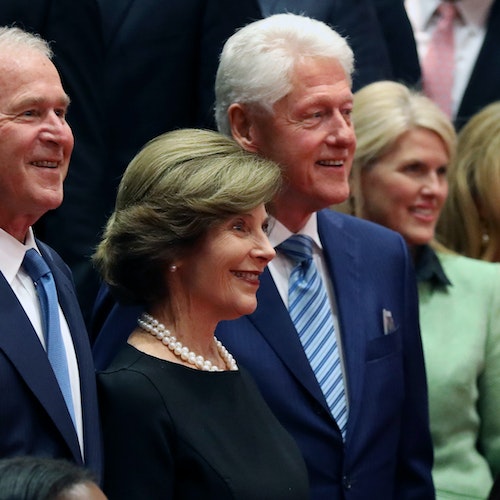 Presidential Leadership Scholars Developing a new generation of leaders who are focused on solving society's most challenging issues. Learn more