The reliable flow of information is arguably one of the most essential battlegrounds in the fight to stabilize democracies around the world. The decline in local journalism, both in the United States and around the world, represents one of the three most important obstacles to that reliable flow. (The other two are authoritarian crackdowns on press freedoms and the rise of disinformation campaigns.)

Margaret Sullivan, media critic for the Washington Post, takes on this issue in Ghosting the News: Local Journalism and the Crisis of American Democracy. A former Buffalo News executive editor, Sullivan contends that “democracy loses its foundation” with the decline in local news. Citizens know less about the work of local leaders, their governments, and their institutions.

Make no mistake. We are losing local news organizations — or seeing their diminution — at an alarming rate. Sullivan notes that more than 2,000 U.S. newspapers have closed down since 2004. As she writes, “These days, there are hundreds of counties in America with no newspaper or meaningful news outlet at all, creating ‘news deserts,’ as they’ve become known. And many of those that do remain are ‘ghost newspapers’ — phantoms of the publications they once were, and not much good to the communities they purport to serve.”

This shift has led to fewer journalists reporting on local and state governments, which, after all, is one of their most important roles. Between 2008 and 2018, newsroom employment fell 47 percent, from 71,000 workers to 38,000.

The pandemic is contributing to the decline, too. The New York Times reports that between March and May of this year, 37,000 news media employees were hit by layoffs, furloughs, or pay cuts. The list includes my former employer, the Dallas Morning News, as well as Sullivan’s former employer.

The lack of advertising revenues flowing into newspapers during the pandemic hastened the decline. But the financial pressures started long before we ever heard of COVID-19. Sullivan digs into her own experience in Buffalo to document the travails.

Her paper used to send a million dollars a week to owner Warren Buffett. But thanks to a myriad of factors — among them, the rise of the internet and social media companies, the 2008 financial crisis, and Craigslist shifting profitable classified ad revenues out of newspapers’ pockets — publishers and editors around the country like her had to face a vastly different financial reality.

With newspapers struggling to keep their doors open, hedge-funds particularly have stepped into the breach. The most recent example came earlier this year when Chatham Asset Management bought McClatchy, a 163-year old operation that owned papers like the Miami Herald, Kansas City Star, Sacramento Bee, and Charlotte Observer. The New Jersey hedge fund has owned other media properties, including the National Enquirer.

The most egregious example has been in Denver, where hedge-fund ownership of the Denver Post, a paper with a string of Pulitzer Prizes, essentially gutted the paper. Sullivan reports that the paper now has under 70 people in its newsroom. That means six dozen people covering a dynamic city and region that two decades ago had more than 600 reporters covering it thru the Post and the late Rocky Mountain News, which closed in 2009. (The media group that owns the Colorado Springs Gazette is launching a new online Denver Gazette this month to strengthen local coverage, reporting, and commentary in Colorado’s capital.)

Concerned what might happen in their own communities, the mayors of Sacramento, California, Lexington, Kentucky, and Miami, Florida, pushed unsuccessfully for local, civic-minded ownership of their McClatchy papers.

Think about that. The very leaders that newspapers must report on, sometimes with serious consequences, lobbying for someone in their community to keep their papers open.

The scene reminds me of when a leading Texas legislator pulled me aside one day in the Texas Capitol to ask who lawmakers could rely upon for good investigative reporting. Texas newspapers were laying off journalists, and he lamented that lawmakers couldn’t keep track of everything that goes on in state government without the help of newspapers.

The demise of local reporting is not just about uncovering corruption. Education stories go underreported. Fewer political candidates get interviewed and covered. And we know less about the good things, such as Eagle Scout badges, cultural opportunities, and high school sports.

The decline comes with an economic factor, too, which Sullivan sums it up this way:

“It’s about tax dollars. When local reporting waned, municipal borrowing costs went up, and government efficiency went down, according to a 2018 Hutchins Center working paper titled ‘Financing Dies in Darkness? The Impact of Newspaper Closures on Public Finance.’”

When you add up the economic, political, and civic impact of the decline in local journalism, Sullivan is on the mark when she says her book is about “the most troubling news-media story of our time: how democracy suffers when local journalism fades.”

The question is, what to do about this trend?

The first step is making sure we pay for local news if we consume it. Pew reported in 2019 that most Americans think their papers are doing fine financially. And only 14 percent pay for local news. If we believe in the importance of community reporting we need to pay for it.

Second, some encouraging initiatives are trying to counter the decline. Texas Tribune may be the most successful effort of all. The Austin-based nonprofit covers the nation’s second-largest state with an award-winning team of reporters who provide original digital stories that also gets picked up in local newspapers. Evan Smith, the CEO and co-founder, travels the state in search of members and donations, which support the Tribune’s work.

Other nonprofits are rising, too. The Colorado Sun, MinnPost, and Voice of San Diego are among them. And “accelerators” like the Facebook Accelerator and Google News Initiative are “training journalists in growing and using digital tools,” Sullivan reports.

Also, John Thornton, an Austin financier who gave the Tribune its first big investment, recently partnered with Elizabeth Green, founder of the successful education nonprofit, Chalkbeat, to start the American Journalism Project. Its purpose is to invest in local nonprofit news organizations.

Similarly, ProPublica, a Pulitzer-winning nonprofit, partners with a limited number of media organizations to place a reporter in their newsrooms to work on government accountability projects.

But all these efforts do not replace the capacity of city newspapers at their zenith. And that leads to the third issue: Should Washington take steps to respond to the demise of local papers?

Sullivan lists several possibilities, without taking a firm stand on them. And that is understandable. There is no magic answer. Here are some of the possibilities:

*Congress investing a limited sum in newspapers, like Washington does for public broadcasting. I see the argument but can’t go there. In the wrong hands, the money could lead to government interference. Come budget time, I fear what might happen if some legislator took out his or her ire for a tough story written about them.

*Give news media organizations a temporary antitrust exemption so the industry can negotiate together with social media companies. The aim would be to get paid for the content the Facebooks and Googles make gobs of money from posting without paying a dime for the information. Sullivan reports that Google made an estimated $4.7 billion in 2018 from news content.

Any exemption would have to be constructed properly. And social media companies would likely need an incentive like public pressure or a tax break to negotiate. But changing antitrust laws, if even only temporarily, is worth exploring.

*Rewrite tax laws so it would be easier for newspapers to become nonprofit institutions, if they like. This has possibilities, but there is no guarantee of more Texas Tribunes. The nonprofit Tampa Bay Times is still struggling. And turning a publication into a nonprofit may require a billionaire to buy out a declining paper, which is not likely to happen in the smaller towns that are turning into news deserts. Still, this idea is worth exploring. So is making subscriptions tax deductible, as they are for public broadcasting memberships.

Meanwhile, the issue those of us who consume local news must keep asking ourselves is where will we get information about our communities or states if our papers go out of business? And will any new providers have high standards about vetting information?

Not to be too hyperbolic, but nothing less than the future of our democracy is at stake.

Demystifying Tests for Parents on September 23, 2020 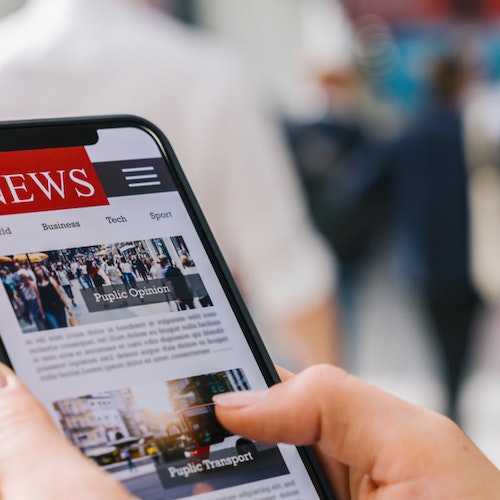 Press Freedom is Democracy’s Canary in the Coal Mine The Bush Institute's Chris Walsh points to the experience of countries like Venezuela to show why protecting freedom of the press is central to protecting all freedoms. Read the article