Warrior Blog: How the Warrior Open Helped Shape My Life

Team 43 member Chris Turner, who shared the stage with President Bush this week at a special Portraits of Courage Engage event, writes on how the Warrior Open golf tournament has made an impact on his life.

Major Christopher Turner first participated in the Bush Center's Warrior Open golf tournament in 2015. He returned this week to participate in the 2017 Warrior Open and share the stage with President Bush at a special Portraits of Courage Engage event, where he talked about his personal struggle to overcome the invisible wounds of war, and his reaction to being painted by the President in Portraits of Courage.

Chris writes this special guest blog for the Bush Institute about his invisible wounds, how the Warrior Open golf tournament has made an impact on his life, and how he sees that reflected in the President's portraits of him.

Words don’t explain the honor of being included in Portraits of Courage and I can’t describe the disbelief I felt when I was informed there were two artworks of me hanging in the George W. Bush Presidential Center. When I listened to the audio book and read the excerpt written by the President, I better understood the paintings and his empathy during my psychological growth facilitated by the Warrior Open.  Each painting expresses a different story, and I am impressed at the intricate details and “emotional accuracy” President Bush captured in each portrait.

The purpose of this blog is not to look into the past and tell my story again, but to explain how the Warrior Open positively shaped my life. When I arrived in Dallas, the memory of my injuries overwhelmed my mind daily.  On the 3rd of October, 2013 in Afghanistan, an Afghan security guard turned his weapon on me and a few of my Soldiers. A firefight ensued that left me with a “reminder” on my right thigh and memories that will forever be etched in my brain.  A threatening dark cloud of fear, pain, and anger surrounded me daily. I concealed my emotions and helplessness at all costs.  I would “paint” a fake smile on my face, which is shown very well in the first portrait by President Bush.

I was a closed book when I first met the other golfers and their families at the Warrior Open.  I did not want to open up to anyone about my experiences.  Doing so would immediately hit the “play” button and take me back to that terrible day.  At the most inconvenient times, something would trigger my memory to relive the events in my mind – I would shut down to everything and everyone around me and feel the exact physical and emotional reactions as if I was back in Afghanistan.  I knew for a long time I needed help – I had trouble sleeping, my brain was overwhelmed with terrible memories, and I drank the pain away.  I was too scared, embarrassed and even ashamed to seek help.  In my opinion there was, and still is to this day, a stigma associated with seeking help for post-traumatic stress (PTS).

The Warrior Open removed that fear of the stigma for me.  I am confident the work President Bush and the Military Service Initiative is doing will help remove that stigma and make those suffering with PTS comfortable with seeking professional help.  I’ve experienced firsthand the benefits of seeking help for PTS and know how it feels to be judged for doing so…but I don’t care anymore. I’m willing to assume that risk because I know how great it feels to embrace positive change.  Getting the message out to that “it’s okay” to seek help is the first step to completely removing the stigma.

Getting the message out to that 'it’s okay' to seek help is the first step to completely removing the stigma.

At the Warrior Open, I witnessed others talk about their injuries, struggles and recovery with great ease – I was impressed that they were able to do this with such strength, humility, and humor.  Talking to them gave me the inspiration to talk openly about my battle with PTS – they encouraged me to get beyond my fears and tell my story. Now I realize they understood the benefits of communicating, not hiding. The time spent on the golf course allowed me to completely forget about my injuries and struggles with PTS.  Beyond the golf competition, the camaraderie was paramount during the Warrior Open – engaging with the other warriors was tremendously therapeutic.  Team 43 gives us a venue of “recovery through community” where it’s okay to let your guard down.

Beyond the golf competition, the camaraderie was paramount during the Warrior Open – engaging with the other warriors was tremendously therapeutic.

Many fellow members of Team 43 have been instrumental in my journey and recovery. I’ve called, texted, and even traveled to a few different cities to build those relationships, strengthen my path of recovery, and introduce them to my wonderful wife and three children.

Prior to the closing ceremony of the Warrior Open, Johnnie Yellock leaned over to me and said “Just wait, you’re going to be amazed!”  Seconds later, Eric Affeldt announced the lifetime membership to ClubCorp and we immediately offered him a Team 43 group hug on the 18th green.  Having that lifetime membership to ClubCorp is incredible; similar to many other Team 43’ers, golf is integral in my road to recovery and I now have that venue for a lifetime.

I knew at some point during the Warrior Open I would be asked to “tell my story” – what I didn’t know is it would be with 400 people listening. Up to that point I had only told my story a few times. I had kept the door to recovery closed for fear of judgment. After hearing General Peter Pace and President Bush talk about the invisible wounds of war, I was immediately inspired to tell my story.  I thought to myself, “Chris, get up and tell your story… if nothing more than because your Commander in Chief just asked you to!”

As I finished my remarks, I was nearly in tears.  I’ve never experienced that amount of relief in my entire life; that moment opened the door to my recovery and I knew something special had happened. I turned and hugged President Bush and he said “good job buddy!”  That emotional night ignited my recovery. I returned to school the following week and volunteered to speak during resiliency training.  Following that, I sought regular treatment and found countless opportunities to tell my story of overcoming the fear of seeking mental health. In the end, the Warrior Open removed the black cloud that surrounds me in the President’s first painting. The second piece shows true happiness, relief and a guy ready to go play a great round of golf. 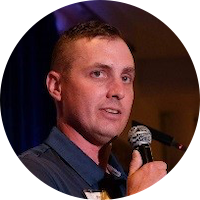 Warrior Blog: How the Warrior Open Helped Shape My Life

School Libraries Play an Indispensable Role Tracy Young on May 19, 2017