Use the Data and Shine a Spotlight

Margaret Spellings, President of the George W. Bush Presidential Center and former U.S. Secretary of Education, delivered keynote remarks this month on the need for strong accountability in education and showcasing data to the partnership event with the U.S. Chamber of Commerce Foundation and the NAACP.  Their joint convening was focused on The Path Forward: Improving Opportunities for African-American Students.

Her remarks focused on the importance of strong coalitions in local communities and using objective, comparable and timely data to keep the focus rightly on students and increasing student achievement.  Excerpts from her remarks:

“I love that this coalition of the business and civil rights communities continues to thrive and come together in common cause on issues to ensure the every boy and every girl has access to a high-quality education.

“Powerful partnerships like these between state chambers of commerce and state NAACP chapters are essential. They need to be strengthened and emboldened to fight for every student.

“We need to stand strong as a coalition to ensure that state accountability systems include real consequences and quick action on behalf of students who do not have years to wait for school turnaround and transformation to occur.

“In this era of local control, for those of us who are working to close the achievement gap, we have to be vigilant in our own communities across the country because we will have to go and read the fine print in every single community, in more than 13,000 school districts.

A quality education for every child

“We must not rest until the promise of a quality education is available to every student.

“The federal role in education was initiated by President Lyndon Johnson just over 50 years ago this year. At the time, the nation was in the throes of a domestic upheaval about the equality of all Americans, but President Johnson didn’t back down.

“He established a federal role in K-12 education for the first time so the nation could start leveling the playing field.

“President George W. Bush later would build upon this moral imperative from President Johnson and upon the work of the other presidents before him to ensure our future investments in education were translating into meaningful opportunity and achievement for all.  Our efforts were to do better on behalf of every single child, and to see that we, taxpayers were getting something for our investment.

”When we look at the data in the U.S. Chamber Foundation’s newly released special report on African-American students, I ask, where is the outrage?

“Channel that outrage into action for communities across the country.  Use the data, look at the fine print and hold your local school districts accountable for educating every child to high standards and graduating every student ready to succeed.

“Data is critical. Without it, we cannot improve education. And we have to use it not only as a flashlight to uncover underperformance, but as a way to elevate and herald success when we see it.

“Strong accountability is needed so taxpayers know what they are getting for their money, so parents know how their children are doing, and so that policy makers know how to invest resources.

“There are questions we need to ask our local school boards:  How can we use assessments to better align the standards of our states? How can we learn and refine and improve the testing and measurement systems we have? How do we use technology to give more convenient and readily available feedback to educators?

“Nearly three years ago the Bush Institute launched the first Global Report Card that helped us compare schools not just to other districts in each state but with countries around the world. We know this is a global marketplace that our students are entering, and they are competing with students all over the world. We will be updating the Global Report Card with school-level data soon.  We look forward to sharing this new data and using it as a flashlight to point out areas where students are performing well compared to their local, state and global peers.

“We will also be unveiling our second Mayors’ Report Card on Education next year, so that mayors, the public and policymakers can engage more vigorously in education in their local communities.

“Use the data and shine a spotlight where there may be uncomfortable areas of low performance.  We need districts and states to act and to help them find what works, and we can use data to do that.”

Her timely comments on strong accountability came on the long-awaited day of the passage and signing of the latest version of the Elementary and Secondary Education Act now known as the Every Student Succeeds Act.  Earlier in the year, the Bush Institute released the Big Idea of School Accountability, which provided a timely look back at the long history of our nation’s education reform efforts as policymakers focus on the next phase of accountability. 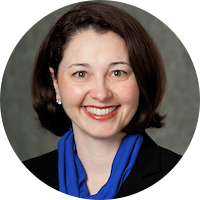 Use the Data and Shine a Spotlight

Teamwork Matters in the Making of a Great Principal Eva Chiang, Ph.D. and William McKenzie on December 17, 2015