Saving Jobs for (Effective) Teachers: What a Difference a Word Makes

When it comes to education policy, Democrats and Republicans may be but one word apart.

In his June 8 radio address President Obama called upon Congress to save the jobs of thousands of teachers placed at risk by America’s sagging economy. If the President had taken the time to add a single simple modifier, “effective,” he might have won over virtually everyone.  Saving “effective” teachers would be a forward-looking policy consideration.

Keeping ineffective teachers in the classroom is not. The truth is that America is woefully short of teachers that can boost student achievement. The jobs of such teachers are worth preserving, rewarding, and expanding.  America has a surplus of ordinary teachers – and in too many cases worse than ordinary. As Stanford economist Eric Hanushek has demonstrated statistically, simply eliminating the weakest teachers would significantly narrow the achievement gap between advantaged and disadvantaged students.

As this fall’s political campaigning intensifies, candidates will understandably concentrate on the economy.  Policy levers such tax reform, deregulation, freer trade, monetary and fiscal measures, and strategic immigration, if orchestrated appropriately, can add to GDP growth. However, all of these levers, even pulled in unison, cannot match the long-run potential power for the nation’s economy of having a better-educated workforce. Thus, candidates, national, state, and local, will inevitably discuss education and that, in turn, will lead to debate over teachers.

Such a debate will be good.  America needs to get its collective head on straight about teachers.

First, understand that there is little else about the day-to-day operation of schools that can match the consequences for student learning of a string of effective teachers. No computer technology, textbooks, performance pay, professional development, libraries or fancy buildings -- and certainly no class size reductions -- can begin to match, dollar-for-dollar what good teachers can do. Conversely, ineffective teachers actively impede learning. So what America needs are more -- many more -- effective teachers.   What can be done to make this happen? There is a three-pronged answer:

We need statutes ensuring student achievement gains are a consideration in budget related teacher reductions.  Districts then can circumvent the widespread dysfunctional practice of laying off junior teachers, regardless of their effectiveness in raising student performance. We need fewer, but more highly paid, teachers.

For this to happen, parents must understand that children are better off with an excellent teacher, even in a large class, than with a mediocre teacher in a small class. There is no acceptable evidence favoring small classes. To obtain a larger cadre of excellent teachers, schools must compete with the private sector for talent.

College graduates contemplating getting an MBA or joining Goldman Sachs need to see teachers as earning a good living, having high public regard, and enjoying professional perquisites.

Professional teachers, in large numbers, will be expensive. There are now approximately 4 million public school educators.  Salary and fringe benefits for each cost $100,000 annually. Pay capable of attracting talent from the private sector likely would have to double such an amount, to $200,000 annually. However, adding $400 billion in extra compensation costs to the $700 billion already spent annually on public schools is improbable.

There are many other competing considerations, e.g., national debt, state deficits, and unfunded pensions. The solution is to have fewer, but much more highly paid, teachers.

The United States has too many teachers – that is, too many ordinary teachers. In a paper that will be published later this year, Michael Podgursky, economics professor at the University of Missouri and fellow of the Bush Institute, points out that between 1980 and 2009, K-12 enrollments rose 21 percent but the number of teachers increased 47 percent.  The number of administrators and other non-teachers jumped 56 percent. The ratio of teachers and other educators to students has fallen sharply, yet achievement gains, while mildly visible, do not match costly increases in numbers of school professionals.

As Podgursky writes, “Since 1980, spending per student grew on average by 2.1 percent per year.  If the staffing ratio had been held constant, teacher compensation could have grown by 85." In other words, after inflation, teacher pay could have nearly doubled.

In the past few years, of course, state budgets have stagnated, and schools districts have cut employees. If they had been releasing ineffective teachers, they would only be culling the herd, and reductions would not damage learning.

However, because of seniority-based layoffs, the workforce has diminished in size, with no corresponding increase in effectiveness. By ending the employment of two $100,000-a-year ineffective teachers, and recruiting one $200,000 a year effective teacher, the United States could displace Singapore and Finland at the top of international student achievement, and the gap between advantaged and disadvantaged students would virtually disappear.

We must equip teachers with technology that elevates student learning, saves money, and restores important personal contact between student and teacher. Education needs to join practically every other economic sector, where modernization has brought greater productivity – higher output with lower input.

It can be done. The successful Alliance Charter schools in Los Angeles use one teacher for every 48 students.  Rocket Ship Charters follow the same pattern. Effective teaching, technology, high expectations, and accountability to parents and students – that’s the rout to significant learning every day on far fewer dollars. What a difference a word can make.

This post was written by James Guthrie, the Nevada superintendent of public instruction and senior fellow at the George W. Bush Institute. 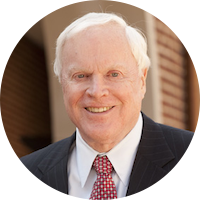 Saving Jobs for (Effective) Teachers: What a Difference a Word Makes