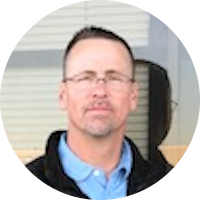 Tracy Reep joined the Texas Army National Guard as an Artilleryman in November 1989 while a freshman at Midwestern State University in Wichita Falls, TX.  Tracy served with his local National Guard Artillery unit as a citizen soldier until being called up to active duty in support of Operation Iraqi Freedom in January 2003.  His unit (2nd/20th FA (MLRS)/4th ID) moved into Iraq in mid-April 2003 and was tasked with performance of various Infantry/Military police related jobs, in addition to their main Artillery mission.

On Veterans Day 2003, while conducting convoy security near Baghdad, his detail was ambushed.  Insurgents initiated the ambush with improvised explosive devices (IED), small arms fire, and rocket propelled grenades (RPG).  Shortly after taking up a fighting position Tracy was hit with shrapnel from a RPG.  Tracy took the blast to his left side including his hand (amputated his ring and small fingers), elbow, shoulder and face. He was immediately medically evacuated back to the United States where he received treatment at Brooke Army Medical Center in San Antonio, Texas.  For several months he was completely blind in both eyes. Tracy ultimately lost his left eye but regained full vision in right eye. On 01 JUL 2004, after eight months of intense medical treatment, Tracy was honorably discharged from active duty and medically retired.

Once back home, Tracy began to feel the pressures of reintegration back to civilian life which started to cause problems between he and his wife Elizabeth, as well as his two sons.  Afterward, Tracy says, “I was always irritable, and quick tempered toward those I loved the most”.  Fortunately, his wife Elizabeth, who had received her Master’s degree in Social Work quickly recognized Tracy’s symptoms as PTS.  That was when Tracy began to realize he had to deal with these issues before they lead to the end of his marriage, and permanently damaged his children’s psyche.

One of the ways the couple went about addressing their issue with PTS was through participation with Veteran Support Organizations, specifically their veteran/family events.  Elizabeth found these events so helpful for her family and desperately needed throughout the community of post 9/11 service members that she and a colleague started a non-profit organization, CAMP COPE.  The organization focused on the children of service members wounded, deployed or killed in action.  The time Tracy and his family spent helping other service members has made all the difference in their own understanding.  Although Tracy’s PTS is lifelong, it can be managed with the right kind of support.  Additionally, they learned the positive outcomes felt by the veteran and their spouses have a profound impact on their children.

The game of golf played an integral role in helping Tracy mitigate the effects of PTS.  While he had a lifelong love for the game he never realized the therapeutic and healing value of golf.

As an example, while recovering at Brook Army Medical center in the spring of 2004, Tracy and fellow wounded service members regularly snuck off once a week to the Fort Hood golf course and play 9 holes. In hind sight Tracy says, “The break those spring afternoons of golf provided us was an invaluable respite from the regular series of surgeries, doctor’s appointments, and physical and occupational therapy sessions we all had to endure while recovering from our physical and psychological wounds”.

By fall of 2011, Tracy’s passion for the game and constant focus on improvement allowed him to qualify for and play in the inaugural President George W. Bush “Warrior Open” event.  Although nervous about personally meeting his former Commander in Chief, Tracy was quickly and easily put at ease by the down to earth manner in which President Bush interacted with him and the other Warrior Open participants.  The professionalism and support of all of the event staff was incredible, the golf course was immaculate, and his fellow competitors were and are True American Heroes!  Tracy says, “It just doesn’t get any better than that”!  And although he says he didn’t play his best, the experience proved to be an incredible memory for him and his family.

The Warrior Open provided an opportunity to forge lifelong friendships with his highly respected fellow 2011 Warrior Open participants. The Warrior Open Alumni program which was created in 2015 by President Bush and his amazing team has become an invaluable addition to the event and has provided a badly needed opportunity for the Warriors to reconnect with their brothers and sisters of the Warrior Open Team. “As a family, we are honored to be included in such a rewarding event and we’re grateful for the healing encouragement felt through our participation.”

Tracy, Elizabeth and their three sons live in Grand Prairie, Texas where they both own and operate small businesses near their home. As a service disabled veteran, Tracy’s company, Wounded Troops Up, LLC, co-owns a joint venture that provides in-home oxygen service to over 3500 veteran patients through a service contract with Department of Veterans Affairs.  Elizabeth runs Reep Counseling, LLC which mainly focuses on marriage and family counseling for service members.  She also operates her non-profit organization, Camp Cope.

Because of his bravery, Tracy has been awarded the Purple Heart, the Meritorious Service Medal, three Army Commendation Awards, and numerous other awards.

Tracy is an active lifetime member of Disabled American Veterans, Veterans of Foreign War, and Military Order of the Purple Heart. He is also an alumnus with the Wounded Warrior Project.

Despite the incredible challenges that Tracy has faced, he cherishes the opportunity to assist other veterans in their quest to return to a normal.