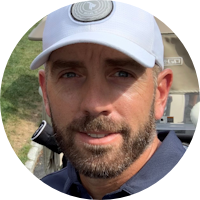 Captain Jerry Woods, U.S. Marine Corps, Ret. enlisted in the Marine Corps in 1998.  In 2008, he was commissioned as a Second Lieutenant.  During his career, he served as an enlisted Infantryman deploying twice to Iraq from 2003-2004, and later to Afghanistan in 2014 as an Aviation Supply Officer.

During his second deployment to Iraq in August of 2004, Woods’ unit was involved in the Battle of the Najaf Cemetery.  He and two other Marines were hit by a mortar round, and Woods received severe shrapnel wounds to his left leg.  While state-side, he fully recovered, but multiple pieces of shrapnel remained in his leg, and one lodged in his knee.  Woods returned to full duty and eventually deployed again.

Golf has always been one of Woods’ most treasured hobbies.  It has played a significant role in both his recovery and his transition from the military to civilian sector.  The sport has provided him the avenue to escape when needed, provides a mental and physical challenge to help with healing, and many opportunities for him to meet and play with many other veterans.  He is truly honored to be part of Team 43 as a two-time participant of the Bush Center Warrior Open and 2019 Champion.

After 20 years of faithful and dedicated service Captain Woods retired in May 2018 and is now working for the United States Navy as a government contractor. He currently resides in Phoenix, AZ with his wife Tammy, and two children, Kylie and Jacob.