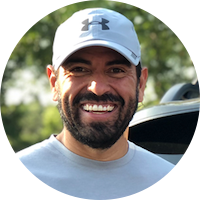 Major David Carrasco joined the U.S. Army in 1991 as a Quartermaster Soldier.  He served honorably for 20 years and retired in 2011 with many medals and accommodations.  Carrasco served his first eight years as an enlisted soldier, obtaining the rank of Staff Sergeant.  In 2001, he was selected to attend Officer Candidate School at Fort Benning, GA.  Subsequently, Carrasco was commissioned as an officer.

During his military career, Carrasco deployed numerous times.  His first deployment was to Mogadishu, Somalia in 1993, to Bosnia and Hungary, and finally to Iraq in 2003.  The results of war had a profound impact on Carrasco.  In 2010, he finally sought help and was diagnosed with Post-Traumatic Stress (PTS).

Deeply committed to wellness and his continued recovery for PTS, Carrasco has become passionate about mountain biking, yoga, and he relies deeply on his faith.

Currently, Carrasco is a Team RWB Eagle Leader for Mountain Biking. He is a Registered Yoga Teacher for the Veterans Yoga Project in Mindful Resilience, offering yoga to veterans and others who are struggling with PTS and other trauma-related psychological difficulties.

Carrasco earned a master’s degree in management and leadership from Webster University and his Bachelor of Science degree in individualized studies from Virginia State University.  He is married to Dr. Vivian Carrasco and they have two sons, and both are currently serving.  Joshua is a 2015 graduate of West Point and a Captain in the U.S. Army, and Jacob is a senior at Texas Christian University and a Calvary Scout in the Army National Guard.