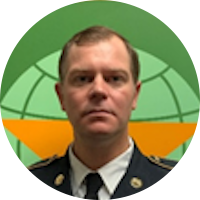 Staff Sergeant Christopher Burrell joined the U.S. Army in 2001 as a Military Police Officer.  His first assignment was in Korea as a Customs and Black-Market Agent.  For the next three and a half years, Burrell was assigned to the Ft. Myer MP Company in Washington D.C serving in The Old Guard.

In 2007, Burrell was stationed at Fort Bragg with the 108th MP CO when his unit was deployed to Iraq.  His unit participated in security missions in the north and after three months, moved to Sadr City to help train the Iraqi Police Force.  In December 2007, Burrell’s vehicle was struck by three Explosive Formed Penetrators (EFP).  Due to the blast, his left leg was amputated above the knee, he suffered multiple shrapnel wounds, burns to his face and body and he was severely concussed.

After two and a half years recovering at Walter Reed Army Medical Hospital in Washington D.C., Burrell returned to active duty status in July 2010 as a Military Working Dog Handler.  During his time at Walter Reed, Burrell attended golf clinics to help in his recovery, both mentally and physically.

Burrell is now retired and resides in Ft. Bragg, North Carolina with his daughter Kaitlynn.