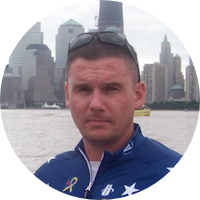 Gunner Sam Mortimer enlisted in the Marine Corps in May 1995 and attended recruit training at MCRD San Diego, California.  Upon completion, he received training at the School of Infantry, Camp Pendleton California, where he received the MOS of 0311.

In November of 1995, he reported to Company I, 3rd Battalion, 1st Marines at Camp Pendleton where he served as a SAW Gunner, Team Leader, and Squad Leader for 2nd Platoon Company I.  He participated in various field exercises in the Arabian Gulf and Horn of Africa conducting humanitarian missions on two deployments in support of Operation Southern Watch.

In February of 1999 he received orders to Marine Security Forces School Chesapeake, Virginia. Upon graduation he was assigned as a Weapons and Close Quarters Battle Instructor, also serving as Breacher Instructor and Martial Arts Instructor.

In July 2001, he received orders back to 3rd Battalion 1st Marines Company K, where he served as a Squad Leader, Platoon Guide, and Infantry Platoon Sergeant. In May 2002 he deployed for 6-months with the 11th Marine Expeditionary Unit in support of Operation Enduring Freedom, conducting terrorist seize missions in Djibouti, Africa and the Arabian Gulf.  Returning in January of 2003, he immediately redeployed with 1st Marine Division, RCT-1 in support of Operation Iraqi Freedom 1. In June of 2004, he departed on a 7-month deployment with Weapons Company to Iraq in support of Operation Iraqi Freedom 2-2.  He served as section leader for the Mobile Assault Platoon.  While forward deployed in the Al Anbar Province, he participated in Operations Diamond Grinder and Diamond Cutter, Operation Black Bear, and ultimately Operation Phantom Fury in Al Fallujah, Iraq.

He received orders to 1st Battalion, 9th Marines, where he served as Company Gunnery Sergeant for Charlie Company.  At 1/9 he deployed with the 24th Marine Expeditionary Unit.  He was then selected to become a Marine Gunner, later promoted to his present rank of CWO2 on 1 February 2011.

After completing The Basic School and Infantry Weapons Officer School, Gunner Mortimer reported to 3d Battalion, 9th Marines.  He deployed to Afghanistan in October of 2012 and upon returning he reported to his current assignment at 2nd Light Armored Reconnaissance Battalion.

Gunner Mortimer’s personal decorations include the Purple Heart Medal w/2 Gold Stars in lieu of 3rd Award, Navy Commendation Medal w/combat V and gold star in lieu of 2nd Award, Navy Achievement Medal w/1 gold star in lieu of 2nd award, and a Combat Action Ribbon. He started biking in 2007 after having issues with PTS and readjusting to being back in the States. He has ridden with Team Operation Shifting Gears and has participated in several 500-600 mile, multi-day rides with various other organizations.