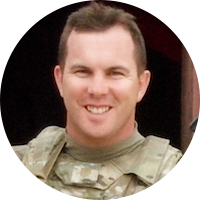 Major Robert Kilmartin enlisted in the U.S. Army in 1994.  He attained the rank of SSG, graduated Officer Candidate School, and was commissioned as a Combat Engineer 2nd Lieutenant.  He has served in numerous Combat Arms leadership capacities during his 20 plus years of service, to include Team Leader, Platoon Leader, Company Commander, and Team Chief with both conventional and unconventional Special Operations Forces (SOF).

For his service, Kilmartin was awarded over 23 citations including multiple Bronze Star and Meritorious Service Medals, and two Purple Heart Medals.  His duty locations have been all over the United States, Germany, Korea, and the Middle East, and he has deployed to Kuwait, Iraq and Afghanistan.

Since returning to the U.S., Kilmartin’s recovery has been long and difficult, spending several years as an in-patient and out-patient at the Tampa VA Poly Trauma Center.  He has struggled with physical pain, extreme memory issues, anxiety, depression, and weight gain.  Through intense mental and physical rehabilitation, the help of family and friends, and athletic endeavors like golf, Kilmartin is thriving and productive.  He also helps others like him every day.

Kilmartin has been very active volunteering for benevolent organizations such as the Tampa Commander of the Military Order of The Purple Heart, working with Special Operations Command (SOCOM) Care Coalition, and is a nationwide motivational speaker for organizations like The Fisher House, Birdies for The Brave, Tee It Up for The Troops, and Operation Healing forces.

Since retirement, Kilmartin successfully competed in the 2015 and 2016 DOD Warrior Games for Team SOCOM and has promoted golf around the country to his fellow injured Veterans.  Kilmartin has a BA from the University of Connecticut and an MBA from Columbia Southern.  He will soon be entering his third and final year at Stetson University College of Law in the Tampa area, and is supported by his wonderful wife Christina, and four children.