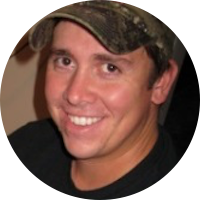 Retired Staff Sergeant Bobby Dove joined the U.S. Army in August 2008.  He enlisted as a Special Forces recruit and completed training at Fort Benning and Fort Bragg.  Dove earned his Green Beret in August 2011 and was assigned to 7th Special Forces Group on Eglin Air Force Base, FL.

In January 2012, Dove was deployed to Afghanistan and on June 9, he was involved in an IED blast.  He suffered amputations of his dominant leg and hand as well as many other life-threatening injuries.  Dove completed seven months of rehab at Walter Reed before returning to active duty and serving on a non-combat deployment 12 months post injury.  He medically retired from the Army in July of 2014.

Dove credits his love of the outdoors as a driving force to overcoming the obstacles presented to him since his injury.  In his free time, he enjoys hunting, fishing, archery, and golf.  He is also a husband, and a proud father to his son, Wyatt.  Dove currently serves on the board of directors for the non-profit organization Special Operations Wounded Warriors.  He also owns and operates “Hooligan Charters”, an inshore fishing charter out of Destin, FL.

Dove credits Team 43 as continuing to have a positive influence in his life.  It has given him access to numerous resources to continue his recovery, provided once in a lifetime opportunities, and introduced him to supportive network of individuals.  He is proud to say he is a member of Team 43.