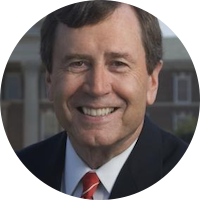 R. Gerald Turner has been the president of Southern Methodist University (SMU) since 1995, leading an era of unprecedented progress. To fund additional scholarships, endow faculty positions and new facilities, he has worked with SMU’s Board of Trustees to raise more than $1.2 billion through consecutive major gifts campaigns.

In addition, applications to SMU have more than doubled, student quality has increased, and the university continues to rise in academic rankings by national organizations. SMU charts this growth in prominence as it marks the 100th anniversary of its founding, celebrated in 2011, and the centennial of its opening in 2015.

Dr. Turner serves on the board of the American Council on Education and the National Association of Independent Colleges and Universities and co-chairs the Knight Commission on Intercollegiate Athletics. He serves on the boards of the Methodist Hospital Foundation, the Salvation Army of Dallas and the Dallas Regional Chamber.

Dr. Turner received a Bachelor of Science from Abilene Christian University and a master’s and doctorate degrees from the University of Texas at Austin. He and his wife, Gail, have two daughters.