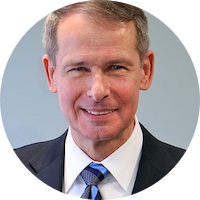 General Peter Pace served as the sixteenth Chairman of the Joint Chiefs of Staff from 2005-2007. Prior to becoming Chairman, he served as Vice Chairman of the Joint Chiefs of Staff. General Pace holds the distinction of being the first Marine to have served in either of these positions.  General Pace retired in 2007 after more than 40 years of active service in the United States Marine Corps.

During his distinguished career, General Pace held command at virtually every level, beginning as a Rifle Platoon Leader in Vietnam.  He also served in Europe, Japan, Thailand, South Korea, and Somalia.

Born in Brooklyn and raised in Teaneck, NJ, General Pace graduated from the United States Naval Academy in 1967. He holds a Master's Degree in Administration from George Washington University, attended the Harvard University Senior Executives in National and International Security program, and graduated from the National War College.

In June, 2008, General Pace was awarded the Presidential Medal of Freedom, the highest civilian honor a President can bestow.

He is currently serving on the Board of Directors of several corporate entities involved in management consulting, private equity, and cybersecurity.  He has previously served on the President’s Intelligence Advisory Board, the Secretary of Defense’s Defense Policy Board, and on the Senior Advisory Group for the Director of National Intelligence.

He has served as an adjunct faculty member and visiting professor for Kelly School of Business, Indiana University; Fordham University in New York, and Georgetown University in Washington DC.  The General enjoys participating in numerous professional military education programs, and makes time to address every class of Marine second lieutenants at The Basic School.

General Pace and his wife, Lynne, are associated with a number of charities focused on supporting the troops and their families, including the Marine Corps Law Enforcement Foundation; the Fisher House Foundation; and Our Military Kids.