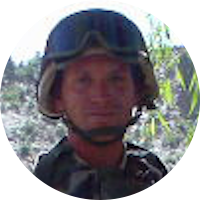 Sergeant Manny Colón enlisted in the U.S. Army as a cannon crew member in 1993.  In 2004, he deployed to Afghanistan with the 25th Infantry Division 3rd Battalion 7th Field Artillery.  During his deployment, Colón’s platoon was selected to serve with the Special Forces group at Camp Tillman in Lwara, Afghanistan.  While in country, he endured numerous attacks and suffered from head trauma.

Sergeant First Class Colón, his wife, and their two children live in Orlando, Florida, after he was medically retired with permanent combat disabilities from United States Army. He is part of several organizations such as the Wounded Warrior Project® and Fairways for Warriors, and enjoys volunteering his time by facilitating a local Warrior Peer-to-Peer support group.