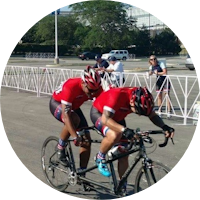 Sergeant First Class Jorge Avalos joined the Army in 1992.  During his deployment to Iraq in 2007, an IED hit Avalos’ vehicle, where he suffered a traumatic brain injury (TBI).   In 2011, Avalos was participating in a skydiving demonstration and his canopy collapsed as he was getting ready to land and he crashed to the ground at 45 mph.  The impact crushed his left foot, caused a partial amputation to his left leg, broke his back and left him paralyzed from the waist down.  He suffered another impact to the head, which exacerbated his existing TBI.

During his recovery, Avalos picked up cycling as a part of his rehabilitation.  In 2012, while riding his bike to train for the DOD Warrior Games, Avalos was run over by a truck.  He was severely injured with a fractured tibia and fibula of the left leg, a broken ankle in six pieces, four broken ribs, compression fracture of three thoracic vertebrae, and separation of the ureter from the left kidney, and eventually lost his kidney 10 months later.  Two months later, he was back on his bike.

After 23 years of service, in February 2015, Avalos was medically retired from the Army.  He remains an avid bike enthusiast.  He's since competed nationally and internationally for road and track cycling.  He’s a three-time Texas state time trial champion and has won multiple able bodied and paracycling races.  Avalos pilots tandem bicycles for blind and visually impaired cyclist that wish to compete in the Warrior Games and other paracycling events.  In 2016, he was selected to participate in the Bush Institute’s W100K as part of Team 43.

Since retirement, Avalos attended the United Bicycle Institute (UBI) in Portland, OR and earned certifications in all their bicycle technician courses and all of their bicycle frame building courses.  He is currently working on building his business as a custom steel and titanium bicycle builder.