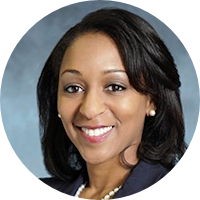 Erica Jeffries was announced as the Director-designate for the Illinois Department of Veterans' Affairs by Governor Bruce Rauner on Jan. 16, 2015, and was confirmed on March 19 by the Illinois State Senate. An Army veteran, Jeffries comes to the IDVA with over fifteen years of corporate, government, and military experience.

In the corporate world, Jeffries joined Exelis Inc., a global aerospace and defense corporation, as a Corporate Executive in June 2012 and was the Chief Inclusion and Diversity Officer for the more than 10,000 Exelis employees worldwide. While there she was responsible for all training, learning and development relating to diversity, and inclusion in the workplace. She also developed and led the Leveraging Military Leadership Program, Exelis’ signature corporate philanthropy program.

In government service, Jeffries served as a White House Fellow (2010-2011), and worked at the US Environmental Protection Agency (EPA). She later received an appointment to serve as the Senior Advisor to the EPA Chief Financial Officer. Prior to her White House Fellowship, Ms. Jeffries was an Associate with Booz Allen Hamilton where she specialized in defense strategy and national security policy supporting government clients both domestically and internationally.

Following her graduation from the United States Military Academy at West Point, Jeffries served as an active duty Army aviation officer. She was a platoon leader and an Executive Officer in an Aviation battalion as a UH-60L Blackhawk helicopter pilot, and later as the Assistant Secretary of the General Staff (ASGS) for all of III Corps and Fort Hood, one of the Army’s largest installations. Ms. Jeffries was medically retired in 2003.

Jeffries holds a Bachelor of Science in International Relations and Systems Engineering from the United States Military Academy at West Point; a Master of Arts in National Security Studies from the School of Foreign Service at Georgetown University; and a Master of Business Administration from the Pamplin School of Business at Virginia Tech University.