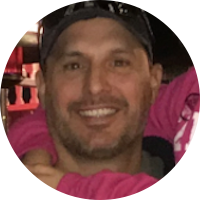 Command Chief Master Sergeant Daniel P. McGuire served in the U.S. Air Force for 28 years. He served in the logistics career fields for approximately 22 years of his military career.  McGuire deployed nine times, the first being Desert Storm in 1991 the last in 2007 to Afghanistan.  During 2001-2007, McGuire deployed four times, twice to Iraq and twice to Afghanistan. .

McGuire was injured during his last deployment to Afghanistan in 2006-2007 when his vehicle was struck by a Vehicle Bourne Improvised Explosive Device (VBIED).  He received numerous injuries to include burns, broken ribs, a concussion, and a Traumatic Brain Injury (TBI).

Late in 2007, once he had returned home, he realized the worst of his injuries.  McGuire began having chronic PTS, major depression, extreme anxiety, and hyper vigilance.  Because of this, he was finally medically retired from active duty two years shy of his goal of 30 years.

McGuire’s battle still exists every day.  He continues to work hard to get back on track and has the support of his wife and two young daughters.  McGuire used to be an avid golfer in his youth, high school, and early in his military career.  Over the past eleven months he has been attending golf events for wounded warriors and has really found it to be peaceful and competitive at the same time.  McGuire is trying his best to enjoy golf with other people as socializing is one of the challenges his doctors has charged him with doing to help in his recovery.