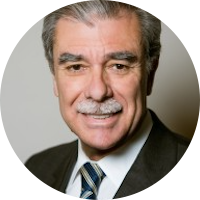 Carlos Gutierrez is Executive Chairman and Co-Founder of EmPath after serving as Chair of the Albright Stonebridge Group.  He served as the U.S. Secretary of Commerce from 2005 to 2009 under President George W. Bush, and joined ASG from Citi, where he served as Vice Chairman of the Institutional Clients Group and a member of the Senior Strategic Advisory Group.  His background adds to the firm’s already deep understanding of the different languages of business, government and civil society, and where they intersect.  His global business insights, international expertise, and integrity add value for clients worldwide in the practice of commercial diplomacy.

Mr. Gutierrez was born in Havana, Cuba.  He joined the Bush Administration in 2005 after spending nearly 30 years with Kellogg Company, a global manufacturer and marketer of well-known food brands, where he started as a sales representative in Mexico City.  After assignments in Latin America, Canada, Asia, and the United States, he became President and Chief Executive Officer in 1999 -- the youngest CEO in the company's 100-year history.  In April 2000, he was named Chairman of the Board of Kellogg Company.

As the 35th Secretary of the U.S. Department of Commerce, Secretary Gutierrez was responsible for heading a Cabinet agency with almost 40,000 employees and a $6.5 billion budget focused on promoting American business at home and abroad.  During his tenure as Secretary, he worked with foreign government and business leaders to advance economic relationships, enhance trade, and promote U.S. exports.  Secretary Gutierrez also played a key role in the passage of landmark free trade agreements that strip away trade barriers, expand export opportunities and boost global investment.

Mr. Gutierrez is chairman of Republicans for Immigration Reform, the political action group that he co-founded in 2012.  He also serves as a National Trustee at the University of Miami and as a visiting scholar at the University’s Institute for Cuban and Cuban American Studies.  He is on the Board of Trustees of Meridian International Center, and a Member of the Board of the U.S.-Mexico Foundation.  He also sits on the boards of the Occidental Petroleum Corporation, Met Life, Inc., and Time Warner, Inc.