President and Mrs. Bush are in Botswana and Namibia from April 4 through 7, demonstrating their continued commitment to the people of Africa through the work of the George W. Bush Institute's global leadership programs. 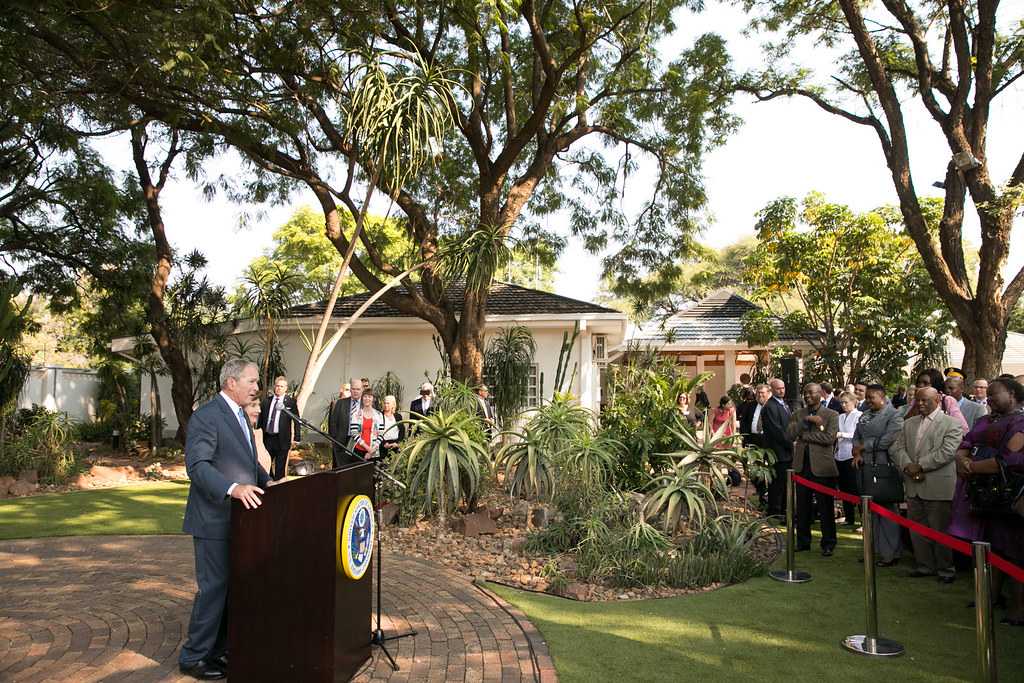 Former Pres. George W. Bush on the incredible success of @PEPFAR and why Americans should be proud: https://t.co/mh4Uf8Ol2E @TheBushCenter

“I come from a country that is compassionate & caring. A country that helped start @PEPFAR…millions now live, who would not have.” -GWB pic.twitter.com/rTbKzkP1t3

Ensuring that #women living with HIV have access to #cervicalcancer services in #Namibia https://t.co/DEeh0vcy3h pic.twitter.com/sPvb7tjbLQ

Last night I had the pleasure of hosting former U.S. President George W Bush and his wife Laura, at a dinner function at our State House. pic.twitter.com/Bs3MR0Wp5b

Student from Ella Du Plessis High School in Windhoek, Namibia welcomes President and Mrs. Bush today. President and Mrs. Bush are visiting Botswana and Namibia as part of their continued commitment to the people of Africa through the work of the Bush Institute’s global leadership programs. Learn more at BushCenter.org. #Namibia #globalhealth

The trip, President Bush’s seventh to Africa since leaving office, demonstrates President and Mrs. Bush’s continued commitment to the people of Africa through the work of the George W. Bush Institute’s (GWBI) global leadership programs.  The trip will highlight the Bush Institute-affiliated Pink Ribbon Red Ribbon®, a global partnership to fight women’s cancers, and the Bush Institute’s First Ladies Initiative, which engages and supports first ladies from around the world to effectively use their unique platforms to advance issues for women and girls.

In Botswana and Namibia, President and Mrs. Bush will celebrate the remarkable progress made over the past two decades to address the challenges of disease, poverty and security, and the critical role that U.S. foreign aid has played in delivering lifesaving treatment for HIV/AIDS to nearly 12 million people. Pink Ribbon Red Ribbon – launched in 2011 by the Bush Institute, PEPFAR, UNAIDS and Susan G. Komen, along with other private and public partners – builds upon the HIV/AIDS platform to combat cervical and breast cancer in the developing world.

Pink Ribbon Red Ribbon began working with the Government of Botswana in 2012. Thanks to the ongoing partnership, more than 22,000 women have been screened for cervical cancer and more than 70,000 girls have been fully vaccinated against the human papilloma virus (HPV) in Botswana. In Gaborone, President and Mrs. Bush will visit a clinic providing screening and treatment services for cervical cancer, discuss new technologies for fighting cervical cancer, and visit a school representative of the country’s vaccination program.

This will be President Bush’s seventh visit and Mrs. Bush’s sixth visit to the African continent since their time in the White House.  Their previous travel included visits to other Pink Ribbon Red Ribbon partner countries Zambia, Tanzania, Botswana, and Ethiopia. This is their first trip to Namibia and second trip to Botswana in the post-Presidency. As of December 2016, Pink Ribbon Red Ribbon partners have screened more than 370,000 women for cervical cancer.