Reliable information is key to Ukraine’s fight for freedom

Wars are not won on the information battlefield, but they certainly are fought there. Russia’s invasion of Ukraine, and the months leading up to its assault on the independent nation, are no different. Information is a weapon, if you will, in any fight for freedom and democracy.

Wars are not won on the information battlefield, but they certainly are fought there. Russia’s invasion of Ukraine, and the months leading up to its assault on the independent nation, are no different. Information is a weapon, if you will, in any fight for freedom and democracy.

The Biden administration understood the importance of fending off Russian disinformation efforts by starting to release last fall the intelligence the United States was gathering about Vladimir Putin’s military buildup along the Ukrainian border. The White House also made clear to some skeptical allies what our intelligence showed about Putin’s intentions. According to reports in the New York Times and Washington Post, the evidence persuaded fence-sitters about the seriousness of his threats.

Obviously, the transparency did not stop the invasion of Ukraine. But, according to some analysts, the release of our intelligence might have rattled the Russian leader that we knew his moves and plans. At the least, this is how information can rally allies and cause an adversary to wonder what more we might know.

The Ukrainian response to Russian troops rolling into their country shows the positive power of social media as well. The negative aspects of social media often are on full display, from spreading disinformation about the pandemic to promoting lies about our 2020 election. Lest we forget, though, social media has an almost unique ability to engage a country’s citizens during a siege.

Just as democratic activists turned to Twitter and Facebook during the Arab Spring, Ukrainian resisters are taking to social media to rally their compatriots. They upload videos and images that citizens and journalists alike study to see what might be happening on the ground. In fact, the Washington Post reports, the citizen response is being used to debunk Russian falsehoods about Ukrainians welcoming the invaders.

Naturally, great care must be taken to determine the authenticity of social media — what is known in today’s world as “media literacy.” The founder of the Telegram app, which is used extensively in Ukraine and Russia, warned its users to check the truthfulness of what they are seeing or reading. (Here’s one primer from the Poynter Institute about how journalists attempt to decipher the veracity of a social media post.) But, when reliable, social media posts from democratic activists can inform Ukrainians and the watching world.

Similarly, a reliable flow of information keeps coming from traditional western media organizations with correspondents based in Central and Eastern Europe. While the punditocracy has taken over too much of cable TV time in recent years, the reporting of organizations like CNN, Fox, the major networks, and national newspapers like the Times, Post, and Wall Street Journal show their invaluable contribution by having professional journalists in a country.

And not only during a time of crisis, but also in peaceful times. During those latter periods, professional journalists based in a foreign nation build up valuable sources and get a first-hand look at a country’s institutions, politics, and cultural norms.

Newspapers especially can provide in-depth reporting, including of leaders like Ukraine’s  Volodymyr Zelensky. The Times and Associated Press did so recently in informative pieces about the comedian-turned-politician. There’s a reason major newspapers like the Times, Post, and Journal maintain a labyrinth of foreign news bureaus. Their journalists don’t have to parachute into a troubled place. They live there and know the people and conditions.

Let’s also not overlook the stalwart reporting of a Ukrainian newspaper like the Kyiv Independent. As the Poynter Institute notes, the three-month old English language paper consists of 30 independent journalists reporting on their country while scouring for funds to keep their operation going.

That said, disinformation remains on the prowl. Russia is using social media (and other channels) to create confusion and uncertainty about its moves. For that reason, the European Union (EU) kicked out RT (formerly known as Russia Today) and Sputnik, two pillars of what European Commission President Ursula von der Leyen called “the Kremlin’s media machine.” She put the EU’s decision this way: “The state-owned Russia Today and Sputnik, and their subsidiaries, will no longer be able to spread their lies to justify Putin’s war.”

Along with disinformation, cyber-attacks remain a threat to western nations. Not only could they impact our electrical grids, banking systems, and government operations, cyber-attacks could make it harder for all of us to access information.

These elements all are part of the information front in the larger military campaign. Like the rest of what is happening in Ukraine, this part of the battlefield remains fluid. Information flows may not give Ukrainians and the larger world prognoses about the next 48 hours, but they can help all of us discern the accuracy of events on the ground at the moment.

For that, we should be grateful. Reliable information is a key part of the search for freedom.

Reliable information is key to Ukraine’s fight for freedom

Two Minute Take: Day One of the Russian Invasion of Ukraine David J. Kramer on February 24, 2022 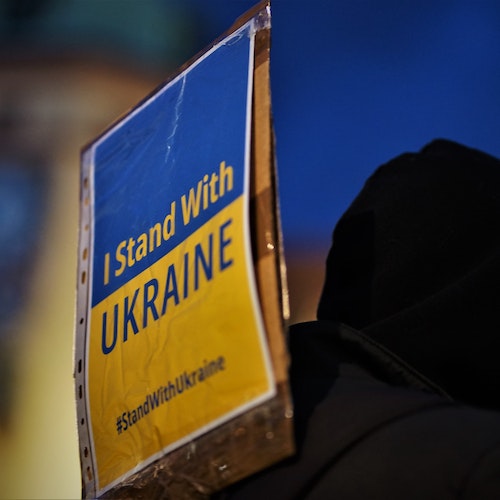 Two Minute Take: Day One of the Russian Invasion of Ukraine Recommendations on American next steps and ongoing sanctions after Russian President Vladimir Putin ordered the invasion of Ukraine. Read the article