The following transcript has been edited for length and clarity.

Amb. Paula Dobriansky: The U.S.-Afghan Women's Council was conceived during the George W. Bush Administration, specifically to reach out to Afghan women and to provide a platform for them to advance their priorities. The Council’s four priorities to improve the lives of Afghan women are: education, health, economic empowerment, and rule of law/governance.

Afghan women also wanted to be empowered economically. They wanted to own their own business and advance their own economic well-being and that of their communities and fellow countrymen.

Rule of law and governance was another key priority for Afghan women. It's interesting to note that there were many Afghan women who, in earlier years, had been judges or lawyers. Under the Taliban, they were stripped of these positions. Women were mistreated and denied their fundamental rights.

A primary purpose of the Council was to bring Afghan women together with Americans, who were in government, the private sector, business, academia, and nongovernmental organizations to work together and assist Afghan women advance those four core areas.

Natalie: Among the accomplishments of Afghan women and girls that were supported by the U.S.-Afghan Women’s Council, which are vast over the last two decades, what stands out to you that's important for people to recognize?

Amb. Dobriansky: First, I would like to recognize the leadership of First Lady Laura Bush. Her support of the Afghan people has been steadfast from the creation of the U.S.-Afghan Women's Council. In fact, she gave an historic radio address in which she appealed to the American public about the plight of Afghan women, the denial of their basic rights, and their ability to advance themselves in education, health, economic wellbeing, and governance.

What have been the core achievements of the Council? When the Taliban were in power before 2001, women were denied an education. Very few women and girls were in school. That changed rather significantly. Over the last two decades, several million have been educated at both the high school and university level, with the creation of the American University of Afghanistan. Most noteworthy, the first elected student body president happened to be a young Afghan woman who was at the top of her class. So, we have seen great strides in Afghan women and girls’ education.

Afghanistan also had one of the highest maternal mortality rates of any country in the world. That was brought down because of the kind of assistance and training that had become available to women. Most Afghan women were able to go to clinics without having to be escorted by a husband or a male family member. The Council provided crucial aid to Afghan hospitals and substantially improved conditions.

Another notable accomplishment was that Afghan women started running for public office and some became members of parliament. They had their voices represented in decisions about the future of Afghanistan. I recall in one of our first U.S.-Afghan Women’s Council meetings in Kabul, one woman stood up and queried, "Why is it that we do not have any Afghan women diplomats?" At that time, there were no Afghan women diplomats. Today, several Afghan women have served as Ambassadors abroad, including to the United States.

Natalie: Women of Afghanistan are an incredible representation of the truth that when half a population is left out, you see failed states. What do you say to people who fear that the gains over the last 20 years are completely lost or perhaps were for nothing? There's a lot of people who look at the situation now and worry that that progress has essentially evaporated overnight.

Amb. Dobriansky: The Taliban can never erase the progress that has been made. They can try to suppress it, but they can never erase it. Afghan women have made a difference. Their lives have been improved.  Many women who are educated are still living in Afghanistan under Taliban rule, yet again. However, a strong foundation of accomplishments has been laid. Even in a time of great concern that the Taliban will continue to suppress severely women’s rights, I strongly believe the voice of the global community will prevail on behalf of Afghan women.

Natalie: Why is it so important, especially right now, for the U.S.-Afghan Women's Council to continue its work into the future?

Amb. Dobriansky: The U.S.-Afghan Women’s Council’s priorities and agenda originated and has been advanced by Afghan women. The Council’s work is now more crucial than ever in ensuring that progress is sustained. Afghan women are strongly vested in seeing that their education, economic empowerment, access to health, and rule of law are furthered.

Additionally, long-lasting personal bonds have been established between Americans and Afghans.

The Council is a voice. It's a joint voice for ensuring that progress continues in Afghanistan. We want to see Afghanistan at peace, stable, and secure. We want all the people of Afghanistan to have their fundamental human rights respected. And we want future generations to benefit from the progress gained.

Natalie: The United States and the international community still have a tremendous role to play in support of the Afghan people. Looking particularly at the U.S. government, as well as the private sector, in your opinion, how can they engage to best support the Afghan people, especially women and children right now?

Amb. Dobriansky: The international community’s voice matters. We need to speak up about reports of atrocities committed by the Taliban. We need to ensure our strong ties to the Afghan people are maintained. We need to hear and listen to what they want and what they need.

We need to guarantee that humanitarian assistance gets to the Afghan people. Concerns abound about the Taliban thwarting and diverting critical assistance.

Elevating the Strength of Afghan Women In marking the 20th anniversary of Mrs. Bush’s radio address amid current events in Afghanistan, the Bush Institute reached out to Afghan advocates across the world for their reflections on the importance of the gains made over the last 20 years and the immense need for global support for at-risk Afghans today. Read the article 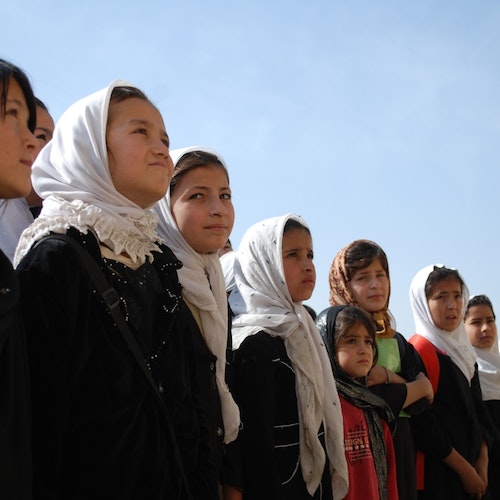 Afghanistan Relief and Resources Here is a partial list of organizations working to provide humanitarian relief to the Afghan people on the ground and to refugees. Read the article