The Complicated Task of Reclaiming Religion from Extremists

Nina Shea, Senior Fellow at the Hudson Institute, and Rabbi David Saperstein share their expertise in trends affecting religious freedom, the greatest threats to this liberty, and how democratic as well as religious leaders might best respond.

The pair shared their expertise in trends affecting religious freedom around the world with Lindsay Lloyd, the Bradford M. Freeman Director of the Human Freedom Initiative at the George W. Bush Institute, Chris Walsh, Senior Program Manager in the Human Freedom Initiative, and William McKenzie, Senior Editorial Advisor at the Bush Institute. The video above and the text below, which have been edited for length and clarity, present their definitions of religious freedom, the greatest threats to this liberty, and how democratic as well as religious leaders might best respond.

How do each of you define religious freedom?

Shea: I define religious freedom in very broad terms. I use the international standard, so it's more than freedom of worship. It's freedom to carry out your faith. It's freedom to educate your children in your faith. And it entails all the activities that a particular religion defines as its scriptures or doctrine or expression.

It's also the freedom to carry out your fundamental rights, and to do charitable work, to have hospitals, to express yourself in the public square. That’s a broad definition, but in the countries I'm focusing on, religion is so repressed and oppression takes many different forms, our organization focuses on the big issues of torture, imprisonment, and killing. Internationally, I'm looking at countries that exterminate people because of their faith.

Just this year, we had a new genocide declared first by then-Secretary of State [Mike] Pompeo, and next by Secretary of State [Antony] Blinken. They declared that the Chinese Communist Party is responsible for genocide against its Uyghur Muslim population. Also, there was recognition of the Armenian genocide a hundred years ago. We’re focusing on these very basic rights of life and liberty.

Shea: David made a very important point because so much of the world does not recognize the basic right to choose your own religion freely. I think of China as being at the top of the list. China is an ascendant world power, maybe a superpower. And it is promoting an authoritarian, repressive model as the alternative to Western liberal democracy and freedom. We need to pay attention to what is happening on this front.

It’s not too different from what's happening in North Korea, where there's a complete control of religion by the Communist Party. Youth under 18 are banned from being exposed to religion whatsoever. The state is replacing sacred texts and pouring in its own content. For example, pictures of Jesus Christ and his sayings, as well as the Ten Commandments, are being replaced with [President] Xi’s inside houses of worship.

Then, there is the Uyghur situation. The Chinese government is imprisoning up to two million innocent persons to transform their minds to accept the Chinese Communist Party's tenets rather than their own.

We've been talking about governments and public leaders and what they may or may not do about protecting and promoting religious freedom. How can religious leaders keep extremists from hijacking and even weaponizing their faiths? And perhaps on an optimistic note, where do you see religious leaders doing that around the world?

Saperstein: That’s a complicated issue. When outside forces try to support, encourage, or give their stamp of approval to the more moderate expression of religion, the very nature of that embrace, whether it comes from Western countries or democracies across the globe or from other religious groups, is used by extremists to discredit the people that we are trying to help. The extremists say, “You see? These people are just agents of imperialism, Western cultural imperialism, political imperialism. These people are representatives of Christians who are trying to convert us."

It's very complicated to be thoughtful, strategic, and tactically effective to support the moderate forces you hope will prevail in the internal battle with religious extremists. You don’t want to undermine them in the process.

Having said that, religious groups and non-religious groups can do a lot. There are many places where the building of resilient interfaith coalitions, in which each member stands up for the other, is a living embodiment of the kind of society they're trying to create. International interfaith groups and individual denominations can support such efforts and we do that through groups like Religions for Peace. And governmental efforts that invest money in training and helping to sustain such efforts across the globe becomes really important.

It's easy to say, "Well, have the courage to stand up and denounce it." But if you're putting your life on the line, it's often a complicated and intensely risky thing to do. And the U.S. and other democracies can help train governments who are trying to support those groups.

More extreme groups will often get traction by providing social services that governments don't. That’s where religious groups with a vast array of social service networks can help fill that void. They can help meet the needs of people and undercut the efforts of more radical groups who use their services to recruit new people.

But the one thing I know is if people, in living out their religious life, have to go underground because of oppression and repression, they will not be able to enjoy the provisions of religious freedom. The test should be, is someone able to live equally as a citizen of a country without regard to their religious identity, peaceful practices, or beliefs? That's the impact of true religious freedom in the context of broader human rights. If they can't live it out, and don't have any hope because the country they live in is repressing them, they become a fertile field for extremists in their own community. So, there is a very strong relationship between religious freedom and democracy.

Shea: I have heard from so many adults all over the globe that their communities used to get along when they were growing up. There was an acceptance that I have been told about by Christians and Muslims alike in places like Iraq.

Suddenly, some of these places in the Middle East, Northern Africa, and Sub-Saharan Africa have become much more radicalized. To a large extent, it has been because of a deliberate policy by Saudi Arabia and other nations to export extremism in textbooks and through education. There has been a greater polarization and more violent attacks due to this radicalization, including the genocide that we saw by ISIS in Northern Iraq.

Saudi Arabia has cleaned up its textbooks. This was the project we took up at the United States Commission on International Religious Freedom. And David, under your tenure at the State Department, as the Ambassador at Large for International Religious Freedom, State’s report started mentioning that there were severe problems in these textbooks and they're not all gone. Before that, there was a tendency to not mention it or say that it's been cleaned up based on the assertions of the Saudi leadership.

Saperstein: Nina, as you know, it's not just Saudi textbooks in Saudi Arabia. It's as you were saying: Their textbooks end up being shipped all over the globe.

Shea: Yes. In fact, ISIS imported Saudi textbooks to use in northern Iraq in its caliphate before they published their own. That problem [of radical indoctrination] is changing after we brought attention to it over 20 years, but the ramifications are still being felt.

I was happy that the Marrakesh Declaration in 2016, which was an effort by the Muslim world to acknowledge the place of minorities, declared that the textbooks should not be tolerated in these societies. Some of their emissaries have gone recently to northern Nigeria, or to the Sahel, where ISIS and Al-Qaeda are running roughshod over the villages and populations. The emissaries are trying to communicate to them that this is not what Islam teaches.

This brings me some hope. The Nahdlatul Ulama, in Indonesia, which is the world's largest Muslim association, also has gone through some of these radical areas saying that this is not the way, that we have another interpretation that rejects this kind of violent jihad.

Saperstein: You’re right. The humanitarian Islamic effort that they're undertaking is important. In addition to the Marrakesh Declaration., the World Muslim League has really been pushing similar ideas.  And you have the fatwa that came out of Bangladesh talking about the protection of minorities. These battles have to be won within each religious group, each religious faith. It can't be imposed from the outside, and we need to find ways to be supportive of those efforts without giving ammunition to the critics.

You gave great examples of where we do see some positive trends that are happening within our own faith groups. We each have to worry about that because there are extreme views in Judaism and Christianity as well. Confronting that extremism is something that all of us can and must do.

Shea: Pope Francis went to Iraq earlier this year and met with the Ayatollah Sistani, the Shiite leader. That was a huge event because the Ayatollah had not met with a Christian leader before. I have heard feedback from the Christian leadership in Iraq that it has made a difference, that there is a greater goodwill.

That was a proud moment on both communities' parts, and there are efforts by Muslims and Christians to rebuild Mosul and destroyed churches and tombs, like the Prophet Jonah's tomb.

Saperstein: Yes, and look at the Pope and the Grand Imam of the Al-Azhar in the United Arab Emirates. They hosted the Human Fraternity Declaration as well.

A lot of encouraging things are going on, but there is a lot of work still to do when we have so many people living in repressive circumstances.

The Complicated Task of Reclaiming Religion from Extremists

China’s Persecution of Uyghur Muslims is an Attack on Freedom and Democracy on November 30, 2021 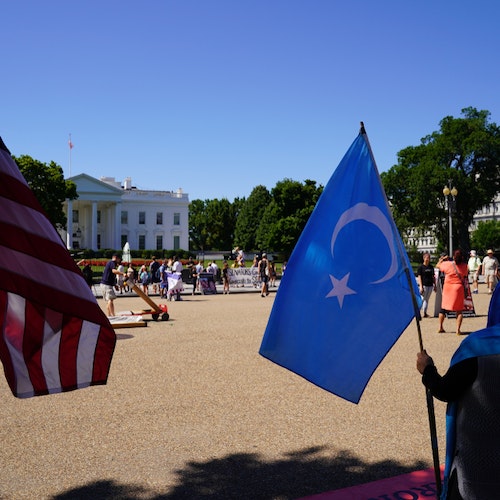 China’s Persecution of Uyghur Muslims is an Attack on Freedom and Democracy Rushan Abbas and Ziba Murat, both of whom are United States citizens, speak about the Chinese government’s treatment of Uyghur Muslims and contend that the United States and other democracies need to uphold religious freedom and human rights as a model for nations to follow as China attempts to expand its reach around the world. Read the article 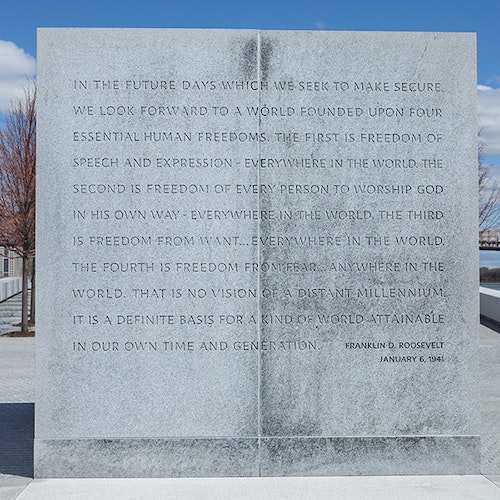 Effective Leadership Needed to Get Religious Freedom Right In the sixth installment of Democracy Talks, Lindsay Lloyd, Bill McKenzie, and Chris Walsh argue that the health of democracies around the world depend upon getting the basics of religious freedom right. Read the article 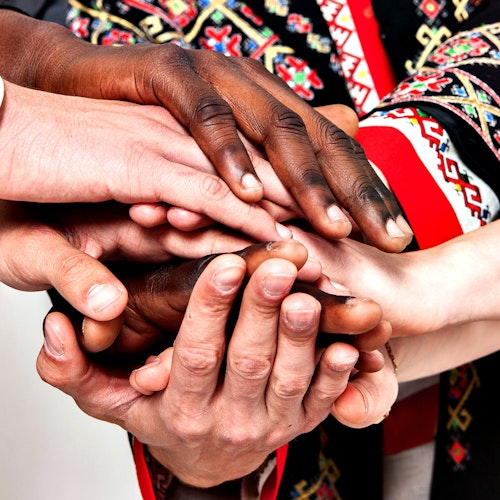