Manu Meel, who graduated from the University of California-Berkeley, is CEO of BridgeUSA, an organization that seeks to engage the next generation of Americans in the future of democracy. Valerian Sikhuashvili, a graduate of Columbia University and Johns Hopkins School of Advanced International Studies, is Director of Academic Programs at the Alexander Hamilton Society. The aim of his organization is to launch young people into foreign policy and national security careers with a belief in strong, principled American leadership.

The young democracy activists spoke about civic engagement, civil dialogue, and civics education with Lindsay Lloyd, the Bradford M. Freeman Director of the Human Freedom Initiative at the George W. Bush Institute, Chris Walsh, Senior Program Manager for the Human Freedom Initiative, and William McKenzie, Senior Editorial Advisor at the Bush Institute. In this excerpt from their conversation, they discuss engaging young Americans in strengthening our democracy through the building of civic muscle. Their exchange continues in the video above.

Where do you see civic engagement happening among young people? And I hope that you will highlight the work of your organizations.

Valerian: We have college chapters that students run and organize. They invite speakers to talk about issues like democracy and human rights, and they host officials and practitioners to engage in these conversations. They also run their own student group discussions and book clubs. The purpose is to have a constructive, serious conversation about key issues facing the country.

As an organization, we believe that the world is safer, more prosperous, and more peaceful when the United States exercises leadership and engages the world. We believe the U.S. needs to maintain that role.

We organize our discussions in a way that people who might disagree with that belief can get some value out of it. I speak to many students with whom we disagree on issues, but they enjoy being part of the chapter, hearing from speakers, and having a serious conversation. We are not trying to provoke people, as some speakers at universities try to do. We want a serious conversation in the pursuit of truth and meaningful engagement.

Manu: In 2017, when I was a freshman at UC-Berkeley, we had this right-wing provocateur named Milo Yiannopoulos come to campus. Now, no matter where you are on the political spectrum, we thought that he should have the right to speak. But there were huge protests that evening. We had campus property destroyed, there was a fire on campus, and his appearance sparked a discussion about free speech on college campuses.

The next day, students spontaneously gathered in circles on Sproul Plaza, which is the main area of Berkeley. They just talked and listened to each other. A couple of us got together and said, what if we created a listening space that was student-led with no administration and faculty. This became a place where people can intellectually explore and escape from the partisan reality of today.

That listening space snowballed into BridgeBerkeley. There already was a BridgeNotre Dame, so we said, let's create BridgeUSA, where you have listening spaces and civic spaces across the country. They are founded by students with the explicit goal of elevating a politics of empathy. If you want to have constructive, engaged discussions, there are places for students to go.

This is the biggest problem I've seen on campuses. You see people on the extremes of the right and left who are extraordinarily loud and vocal. As a result, you think that is the norm. So, you either disengage because you don’t want to engage that way, or you radically engage and join one of those two camps.

You see people on the extremes of the right and left who are extraordinarily loud and vocal. As a result, you think that is the norm. So, you either disengage because you don’t want to engage that way, or you radically engage and join one of those two camps.

Our job is to break that binary choice. Can we empower the vocal people that just want reasoned conversation? We often look at politics in a right-left spectrum. This is what a lot of young people think about it as well. You're either somewhere in the middle or you're on the extremes.

Our thought is there's also a Y axis of temperament. You can be ideologically right or left but be moderate in temperament. Our job is to engage and activate people in that box. If we can do that, we can disrupt how students think about politics and have reasoned conversations.

Valerian: One point that Manu raises is something that I've also noticed among students. I sometimes hear a reluctance in them to want to go into politics or public life because of the point that Manu just made. They see some leaders not embodying the values that you are taught when you are a kid. They think, “Do I need to go into politics? Do I become a liar now? Do I say dishonest things?”

That’s discouraging. And that's why character matters in leadership. Good people don’t go into politics when they don’t see leaders with character. And bad leadership attracts people who may not value character.

Not to sound cliché-ish and criticize the media, but the media’s not very helpful by picking two or three people from each party and making them the face of each. We are a democracy, so sometimes we elect bad politicians. That’s part of the deal we get. But the kind of leaders we have matters. They can inspire the future generation and the people of temperament that Manu describes.

I don't know how to change that, but I try to encourage students with good character. I tell them that if they don't go into the government, they’re leaving that space to someone else."

Manu: I know we've been on this question a bit, but one point that Valerian made at the end struck me. And that is about apathy. People are consumers of politics because everyone has a phone and is engaged in some way. But there’s apathy in getting engaged in a physical sense, working in politics and voting. That's the problem we're talking about.

I think the reluctance of a lot of people to go into government now is a result of people seeing government as being an inept institution. There are two routes to address that. You can continue minimizing the role of government and upscale the value of private engagement, civic engagement, and nonprofit work. Or you can look at areas where government intervention can help.

You can be conservative in how you approach that intervention, but you can create policy that shows government actually helps people. For example, the [COVID] vaccination will do a lot for young people in that they get to see tangible ways in which the government is helping and working. When people see the institution working, they can see a return on their engagement. They may do something because this institution is responsive. We have to show that they work.

Civic associations, like our organizations, play a critical role in the United States. And they need to maintain that role, along with encouraging better and more efficient government. Civic associations are a valuable part of our history.

Valerian: I agree. There has been an anti-government sentiment in our history. We can discourage students from getting into the government if we continuously point out things that the government does wrong. That becomes a vicious circle, and you never fix anything.

But civic associations, like our organizations, play a critical role in the United States. And they need to maintain that role, along with encouraging better and more efficient government. Civic associations are a valuable part of our history. They have done great things.

So, there’s a different way to engage civically than just the government. That makes America special, and both can be done at the same time.

In this fifth installment of Democracy Talks, we take a deep look into the challenges that obstruct greater civic engagement. Read more.
Three Ways to Expand Civic Engagement, Community Renewal, and Civil Dialogue
Be Intentional About Community Engagement and Civil Dialogue
Creating a Sense of Us
Creating Civil Dialogue in the Classroom
Big Citizenship Can Move A Nation Toward Good
Becoming Owners of Our Nation, Community, and Neighborhood
“Trust Brokers” Strengthen Communities
Veterans are a Key Part of Renewing our Communities
Inclusive ‘Placemaking’ Leads to Civic Renewal

Creating Civil Dialogue in the Classroom Keith Hennessey on July 8, 2021 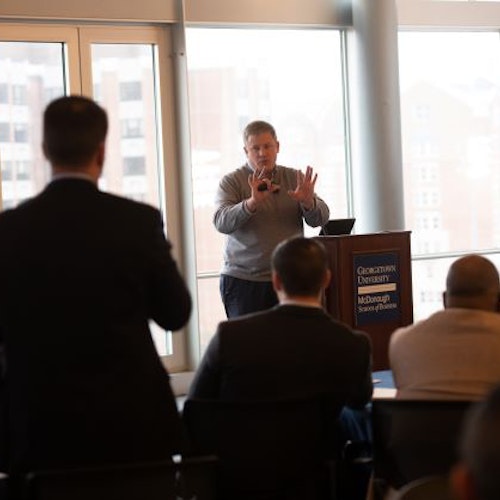 Creating Civil Dialogue in the Classroom Keith Hennessey, a Lecturer at the Stanford Graduate School of Business and the David M. Rubinstein Fellow at the George W. Bush Institute, details how he works to explicitly create respect and charity in his classroom discussions and debates. Read the article