When you arrive at Incheon international airport in South Korea, you run a battery of tests to determine whether you are COVID-19-free. Upon leaving the airport you are required to download an app on your phone that tracks your location. Once at your destination, if your phone remains idle for too long (e.g. when you fall asleep during the day because of jetlag), health authorities call to determine whether you have broken the 14-day mandatory quarantine (and left your phone at home). If you do not answer the call, a health compliance official will show up at your residence to check on you.

These contact tracing apps have played an important part in reducing the spread of COVID-19 in many Asian societies, including in South Korea, Taiwan, and Singapore, which have seen exponentially lower rates of infection and mortality than in the United States. But is this level of privacy intrusion, reminiscent of George Orwell’s 1984, unacceptable to freedom-loving countries? Is there a risk to democracy if the public surrenders all of this personal information to Big Brother?

These contact tracing apps have played an important part in reducing the spread of COVID-19 in many Asian societies, including in South Korea, Taiwan, and Singapore, which have seen exponentially lower rates of infection and mortality than in the United States.

Certainly, in the United States the affirmative answers to these questions explain the aversion to using contact tracing apps. But in Asia, societies have wholly embraced these technologies.

The reason is not because countries like South Korea are not free, as Seema Verma, administrator for Medicare and Medicaid Services, once implied. Nor is it because the Confucianist heritage of Asians make them more obedient to government dictates. Instead, these cases exemplify how open societies are willing to accept a degree of intrusion into their private lives if there is civic trust in the government and their handling of the pandemic response.

People in Taiwan or Singapore do recognize the tradeoff between contact tracing and data privacy. They know that they are being tracked through these technical means and they may even feel a degree of discomfort with this.

However, as one health expert from South Korea explained to me, “If the choice is between my privacy and your life, I am willing to give up my privacy to save you.” This willingness to sacrifice for the other stems not from blind altruism, but from hard lessons learned from past experiences.

The Severe Acute Respiratory (SARS) virus in 2003, the first major novel coronavirus pandemic of the 21st century, and the Middle East Respiratory Syndrome (MERS) in 2015 tore through communities in Asia, wreaking healthcare havoc on governments, hospitals, doctors, and patients who were all ill-prepared. No one had accurate information about the spread of the virus. There was no data available to allow for thorough contact tracing when a positive case was discovered.

Reading through the after-action reports of doctors dealing with these coronavirus crises in Hong Kong, Seoul, Singapore, and Taipei, one is struck by how these echoed the scenes we saw in the United States in March and April about the lack of Personal Protective Equipment (PPE), overwhelmed hospital wards, and underprepared local and national governments in the midst of the COVID-19 pandemic.

Asian societies learned from their experiences. Citizens demanded greater accountability on the part of their governments. Laws were passed that allowed for access to private information such that authorities could provide to their citizens the most accurate, transparent, and up-to-date information about the spread of the virus. Citizens demanded better preparedness, so governments developed public-private partnerships to build capacity in PPE. Bureaucracies were reorganized to prepare for emergency pandemic response.

Once the public felt confident that it could believe what the government was telling them, this gave rise to a civic obligation to comply with the safety and mitigation measures recommended by the health experts, including the use of contact tracing apps.

The bargain between government and society is not limited to Asian countries. In April, Australia launched the COVIDSafe contact tracing app which garnered over one million downloads within hours. Italy launched the Immuni app. Even Germany, known for its strict data privacy laws, has adopted a track and trace app.

Developers have pledged that there are technical safeguards against abuse of all of the private information collected by these apps. Some applications, for example, store the information on your phone and offer the option to upload the data to health authorities for contact tracing. Others automatically delete the collected data after certain intervals of time.

In the end, though, these safeguards are not what reduces the hesitancy of open societies to embrace these apps. Instead, it is the civic trust that develops between state and society after lessons learned from previous pandemics. This is yet another reason we need to build greater trust in our society. Our very health may depend upon a stronger sense of community.

The Democracy Talks series takes a look at how technology is impacting democracy. Read more
Using Technologies to Stand for Freedom in Hong Kong
New Technologies Can Strengthen Democracies
Cyberworld’s Impact upon Democratic Stability
Discerning Truth in Today's Information Ecosystem
Homeland Security Secretaries Discuss Securing the Homeland in an Internet Age
Deepfakes are a Different Kind of Threat to Democracy
How the United States Can Prevail in the Digital Eco-System
Don't Do Our Enemies' Work for Them
Media Literacy Helps Consumers Discern Fact from Fiction 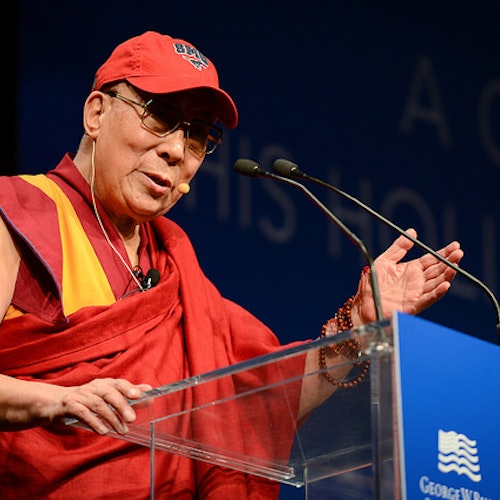