Camping Out for Women in Zimbabwe

Screening women early is an effective prevention method to halt the progression of precancerous lesions to deadly cervical cancer. Women with HIV are more likely to develop cervical cancer than women who are not living with HIV. To address this, Go Further started scaling up screening and treatment services for WLHIV in 2018, building on previous partnership efforts. With the oversight of PEPFAR, the screen and treat program is implemented in eight countries in sub-Saharan Africa, including Zimbabwe where 760,000 women are living with HIV.

The key to the screening program is that when precancerous lesions are found, women are connected quickly to treatment to remove the suspicious spots so they will not become cancerous. In Zimbabwe, 8% of WLHIV who have been screened for cervical cancer have had precancerous lesions that require treatment. Most of the precancerous lesions can be treated the same day by a nurse using cryotherapy or thermal ablation, but for some women with larger lesions, a separate out-patient surgical operation called Loop Electrosurgical Excision Procedure (LEEP) is required.

LEEP is a specialized procedure performed by trained doctors or clinical officers with surgical training. From November 2018 through the end of December 2019 in Zimbabwe, a significant number of women requiring LEEP were not able to access it because LEEP was only available at centralized hospitals that might be difficult for women to access, doctors being on strike, and/or lack of trained personnel and medical equipment to keep up with the number of women needing the procedure. Even at sites that were able to do LEEP, the procedure was only offered on specific dates when clients were not available or clients faced other barriers such as lack of transport that prevented them from keeping their appointment. Because the progression to cervical cancer is faster in WLHIV, we knew we needed to take action to make sure women requiring LEEP were able to access treatment in a timely manner to save their lives.

USAID-Zimbabwe worked with the Organization for Public Health Interventions and Development (OPHID), which implements cervical cancer screen and treat programs as part of Go Further, to find the women who needed LEEP, but had not yet been treated. OPHID reviewed medical records at the clinics they support across the country. They then developed a tracking tool so that women who require LEEP are continuously tracked and followed up so that we are better linking clients to care now and in the future. OPHID procured new LEEP machines and trained additional clinicians which allowed them to open new sites offering LEEP. This made LEEP more accessible for more women closer to their homes.

But there were still women who needed LEEP and had not been able to access it. We needed an innovative approach to bring the service closer to the women who had not yet been served. To address this, we planned and held a series of outreach LEEP treatment camps at different facilities around the countries. LEEP treatment camps allowed us to treat women at facilities that were closer to their homes. The LEEP camps last about three days, and we treated on average, 15 women per day during each camp. We held the first LEEP camp last year and to date we have had camps at five additional district and provincial hospitals with more planned.

OPHID took multiple factors into account to ensure the camps’ success including paying the doctors as well as helping some clients with transport so they could receive the procedure they needed. Through these activities we raised awareness of availability of LEEP services at the new facilities and put systems in place to track and ensure women with precancerous lesions are linked to LEEP treatment in the future, so we decrease gaps in care. The camps also served a training opportunity to mentor and improve quality care among new cadres of doctors and clinical officers.

Although we continue to work to overcome challenges such as not being able to reach clients for follow-up or supporting clients where lack of funds is a barrier to their care, in one year we have been able to double the number of women treated with LEEP from 176 women treated at the end of March 2019 to treating 336 women with LEEP treatment at the end of March 2020. LEEP camps are a promising innovation to improve LEEP treatment rates and better serve women. In Zimbabwe, we’ll keep going further by camping out for women!

Camping Out for Women in Zimbabwe

Testing for Education Gaps Can Identify the COVID-Slide William McKenzie on July 14, 2020

Holly Kuzmich, Executive Director of the Bush Institute, moderates a panel at Concordia's Annual Summit focused on PEPFAR’s 20 years of success and how partnerships play a role in advancing health, wellbeing, and equity in global development.

Cervical cancer is the most common cancer among women in Zambia, with an average rate nearly double the global average. Wanga Zulu, a 46-year-old Zambian actress and mother of five who was diagnosed with cervical cancer in 2014, now uses her platform and status as a survivor to raise awareness about the disease and encourage women to be screened. 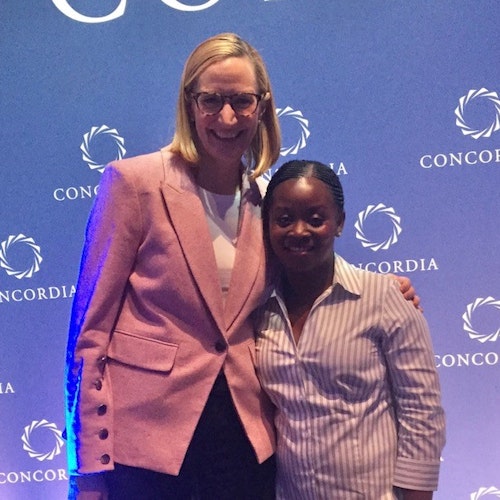 A Partnership That Goes Further For Women Executive Director of the George W. Bush Institute, Holly Kuzmich, discusses the Go Further partnership and the inspiration behind the work. Read the article