The Bradford M. Freeman Director of Human Freedom at the George W. Bush Institute, Lindsay Lloyd, talks with David Kramer, a member of the Human Freedom Advisory Council at the Bush Institute, about  current affairs in Russia. Kramer is currently senior fellow for Human Rights and Diplomacy at the Steven J. Green School of International and Public Affairs at Florida International University. He has a long and distinguished career in Washington, D.C. serving previously at the McCain Institute as President of Freedom House and in a number of senior posts in government, including as Assistant Secretary for Democracy, Human Rights, and Labor at the State Department.

Below is an excerpt from their conversation.

Lindsay Lloyd: You recently gave a talk where you [discussed] disinformation, how it is increasing, and that you are seeing collaboration between Russia and other actors like Iran and China. What can you tell us about these disinformation efforts, and what's their focus? Is it about our political campaign, the Coronavirus, or something else?

David Kramer: It's a little bit of everything, and let's keep in mind, of course, that Russian disinformation efforts are not new in light of the pandemic. This goes back to Soviet times. In the 1980s, the Soviet Union planted a story in an Indian newspaper arguing that the United States actually invented the AIDS virus and was responsible for it. It continued in the Putin period especially. It sort of died down after the collapse of the Soviet Union. Under [Russian President Boris] Yeltsin, we didn't see a great deal of it. But Putin, who came up through the KGB, is familiar with disinformation efforts. We have seen the Kremlin ramp this up, particularly ahead of the 2016 US presidential election, but also in other elections throughout Europe and elsewhere, including the Brexit referendum, and a referendum in the Netherlands involving the EU’s relationship with Ukraine. So, this is not a new thing.

We see this playing out in the pandemic, where Russian disinformation tries to tell Lithuanian audiences and others that a US soldier brought the virus to their country. We see this in propaganda efforts with Russian shipments of assistance to countries like Italy and Serbia, and of course, Russia had a field day with the shipment of a planeload of equipment that came to the United States last month.

LL: The United States is clearly preoccupied with coronavirus and all the consequences coming out of that. Is Russia using our preoccupation to take advantage of the situation, in places like Ukraine or Georgia or the Western Balkans?

DK: Russian activity in these places is not new, but we're not seeing a letup in light of the pandemic, which we should point out has really exploded in Russia. Russia is now, depending on the statistics on a certain day, the country with the second greatest number of cases in the world. There's a growing death rate there. It is spreading throughout the country. It's actually causing some problems in its relationship with China because there have been Chinese who have been in the far eastern part of Russia who are coming back to China and winding up with cases of infection.

So, it is a huge problem in Russia. And in fact, those shipments of assistance that Putin ordered to Italy and the United States and elsewhere may backfire on him.  There is criticism that Russia itself is experiencing severe shortages in certain places outside of the capital city and elsewhere, and that Russia was in no position to be sending much needed medical equipment to other countries.

We see Russia continuing its aggression in Ukraine. There is concern in Ukraine, while also it’s dealing with the pandemic, that it may not be in as good a position to defend itself against a growing Russian military movement in the Donbass Region, the eastern part of Ukraine. We see efforts in Crimea where Russians are trying to conscript Crimean citizens who should still be recognized as Ukrainian citizens, not Russian citizens.

In Georgia, we see the demarcation line that was agreed on in 2008 after Russia invaded is being moved closer and further into Georgian controlled territory. This is particularly in the South Ossetian part of Georgia, which Russia recognized as independent in 2008, although no other country of any consequence has done so.

We see Russian military activity continue in Syria, with Russia along with Assad’s forces continuing to engage in indiscriminate bombings and what some would describe as war crimes. We see Russian activity in Libya, where Russia is trying to play an outsized role there. We see Russian activity on the African continent, particularly through use of the Wagner Group, which is a mercenary outfit controlled by a close friend of Mr. Putin's, Yevgeny Prigozhin, who was indicted by the United States for his role in interfering in the 2016 election. We see it in our hemisphere, particularly in Venezuela, where Russian support for Nicolas Maduro has been rather important in propping him up against pressure coming from the United States and from other countries in the region.

So we're not seeing any letup coming from the Kremlin in its nefarious activities. If anything, it may view this as an opportunity both to deflect attention of its domestic audience from the problems at home, and feeling that there won't be any consequences in that the United States and others are preoccupied dealing with the pandemic.

Five Questions with Matthew Wendel on May 28, 2020 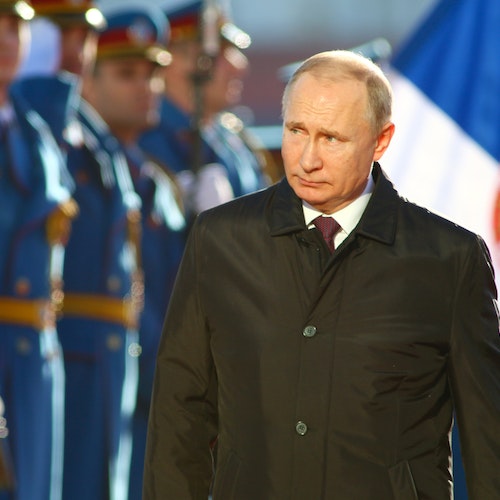