Anita McBride is Executive-in-Residence at the Center for Congressional and Presidential Studies, School of Public Affairs, at American University. She was Assistant to President George W. Bush and Chief of Staff to former First Lady, Mrs. Laura Bush.

Farhat Popal: Tell us about Mrs. Bush’s first trip to Afghanistan in the spring of 2005 – only the second time in American history that a first lady has visited an active combat zone. What inspired Mrs. Bush to visit, and what was trip planning like?

Anita McBride: When I interviewed with Mrs. Bush in 2004 to be her Chief of Staff, I was struck by the first thing she said — that she wanted to go to Afghanistan. Her support and dedication to the people of Afghanistan, particularly Afghan women and children, were well known prior to her historic trip in 2005. In November 2001, Mrs. Bush delivered the presidential radio address using that powerful podium to speak out on the brutality inflicted by the Taliban on the Afghan people, especially women. It marked the first time a first lady delivered the presidential radio address and people at home and around the world listened.

Her stark description was shocking and her call to action for compassion and support for Afghans was heeded. Through her leadership of the U.S.-Afghan Women's Council (USAWC), established in 2002 by President Bush, Mrs. Bush was engaged in all aspects of the Council's work to improve the lives of Afghans. She consistently drew attention to their challenges and highlighted their hard-won progress.  By the time I met with her in 2004 for that interview, she was eager to visit Afghanistan herself and see first-hand the improvements Afghans were making in their lives and to demonstrate her support — especially for the brave and resilient Afghan women.

I outlined a way she could manage the security concerns that the Secret Service and others would undoubtedly have for the First Lady going into a war zone. Working at the State Department, I knew the USAWC, led by Council Chair and Undersecretary of State Paula Dobrianksy, would be traveling to Kabul in March 2005 to coincide with the start of the Afghan school year. The Embassy, military and security personnel would already be preparing for their high-level delegation, making it easier for Mrs. Bush to piggyback on their trip. The President was fully supportive of Mrs. Bush's travel to Afghanistan - a crucial factor to getting the support needed.  Chief of Staff Andy Card made sure we had the military and security assets needed to plan the trip. But he also told me I could not tell anyone on my staff and if the plans leaked, the trip would be off. Only Lindsey Lineweaver (Knutson), Mrs. Bush's personal aide who would travel with us, was aware.

For nearly two months, Undersecretary Dobriansky and her Chief of Staff Kate Friedrich worked closely with me to plan Mrs. Bush's "secret" schedule — an ambitious number of events the Secret Service said all had to be completed during the daylight hours on the ground. In Kabul, Mrs. Bush met with President Karzai; greeted Afghan children going to school for the first time; met with women and men training to be teachers; visited the women's dormitory at Kabul University she helped to launch; presided over the signing of an MOU to establish the American University of Afghanistan (AUAF); toured a marketplace of Afghan women entrepreneurs eager to show her their handiwork and products; planted trees as part of a re-forestation and conservation project; received a reconstruction briefing from the commander of coalition forces, and had dinner with our brave troops at Bagram military base to thank them for their service and sacrifice. Then it was wheels up to come home.

One outstanding memory of the day was the OTR (off the record movement) Senior Advance Representative in the Office of Presidential Advance, Therese Burch, and I worked out with the agents — a visit to an Afghan bakery on the streets of Kabul. The owners showered Mrs. Bush with baked goods to take home to the President. In a building next to the bakery stood three young children looking out of the window at the commotion caused by our large vehicles and security. Therese encouraged them to come outside and the younger two siblings were gently guided by their older brother to greet Mrs. Bush. She embraced them and gave them several small gifts. One image in particular stands out - the curiosity on their faces when looking inside the kaleidoscope she showed them how to use.

FP: As a first lady, why was Mrs. Bush uniquely positioned to lend support to these issues and what has her leadership meant to Afghan women?

AM: Laura Bush recognized the podium she had as First Lady. She was an active and dedicated partner in the Administration's efforts to bring peace and opportunity to Afghans. Through her leadership of the U.S.-Afghan Women’s Council she convened public and private sector partners to address the most critical needs in Afghanistan – needs that were defined by Afghan women themselves: education, healthcare, economic opportunities and political empowerment. She appealed to American women and children to help the women and children of Afghanistan. She believed in the power of education to uplift lives and used her background and experience as a teacher to promote the critical need for education in Afghanistan at all levels. Whenever she met with the numerous delegations of Afghan women teachers, entrepreneurs, lawyers, parliamentarians, civil society activists and many others, she listened to their stories and addressed their concerns.  In one of her final interviews before leaving the White House, Mrs. Bush told the women of Afghanistan she would support them for the rest of her life. To this day, they know they have a champion in Mrs. Bush.

FP: It’s been 15 years since Mrs. Bush’s trip, and Afghan women have made tremendous gains since then, particularly in education. What has been the legacy of the American University of Afghanistan in helping promote these gains?

AM: Education at all levels needed to be rebuilt in Afghanistan and the U.S. was committed to supporting this critical component of the country's reconstruction and development. Women in particular were eager for access to education which was at the core of our efforts to rebuild the education sector. In her 2005 trip to Afghanistan she announced U.S. financial support to launch the American University of Afghanistan (AUAF) and visited the site where the university would be built — a location chosen to be on the same road as the Afghan parliament as a reminder for young Afghans to aspire to become leaders of their country. It was a bold move to launch a liberal arts university but there was historical context for this decision. Before the decades of war in Afghanistan, there was a long history of educational opportunity and exchanges between Afghanistan and the United States and other countries.

AUAF was a grand effort at revitalizing higher level education that would meet global accreditation standards and be focused on the promotion of democratic values, freedom of expression, individual rights, and the study of such disciplines as commercial law, political science and business administration and entrepreneurship. When its doors opened in 2006, there were only 50 students and very few women. Today there are 1,700 students enrolled and more than half are women. In 2015 the students elected their first ever student government association with a female student as its president. Over the course of its history they have produced nearly 100 Fulbright Scholars - many of them women across a variety of disciplines. It's been a difficult road for AUAF with funding challenges and significant security issues that threaten the ability to operate sustainably. It is without question, however, that the quality of education at AUAF remains high, meeting and exceeding national standards and executing partnerships with international universities and educating the next generations of leaders we always believed they would.

FP: Afghanistan is going through a lot right now. The Taliban continue to attack Afghan National Security Forces, and ISIS is still active as evidenced by recent violence against the Sikh minority. There is a crisis of governance as both President Ghani and his opponent, Abdullah Abdullah, claim victory in the presidential election—with a $1 billion reduction in aid from the U.S. as a result—all while the Afghan government attempts to push forward peace talks with the Taliban. And now COVID-19 looms, with 30,000 refugees in Iran returning to Afghanistan as a result of the outbreak. What lessons from that trip are important to consider as Afghanistan seeks to address this multitude of challenges?

AM: In each of Mrs. Bush's three trips to Afghanistan, you could not help but be struck by the strength and resiliency of the Afghan people and their determination to rebuild their country and improve their lives. It is hard to fully appreciate the deep inner reserves from where they draw their fortitude.  But the crisis in confidence in their political leaders in being able to deliver a functioning system of government; and the deep fear, especially among women, of what "peace" with the Taliban really means, finds Afghanistan and its people at an inflection point once again.

It is hard to imagine they could endure much more after so many years of violence and political and economic instability. With COVID-19, we know from our own country's challenges to our health system that an outbreak like this will surely stretch the fragile Afghan health system. This pandemic, coupled with the implications of an economic shutdown and jobless Afghan refugees from Iran who are potentially infected with the virus, will have staggering effects. But Afghans’ resolve has been tested before and their years of hard work despite enormous challenges should be an example that they are determined to survive this too. My worry for Afghans at this time, though, is that U.S. and international support is not at the levels it was when we made that trip.

Common Questions to Better Serve Our Vets Kacie Kelly on May 7, 2020 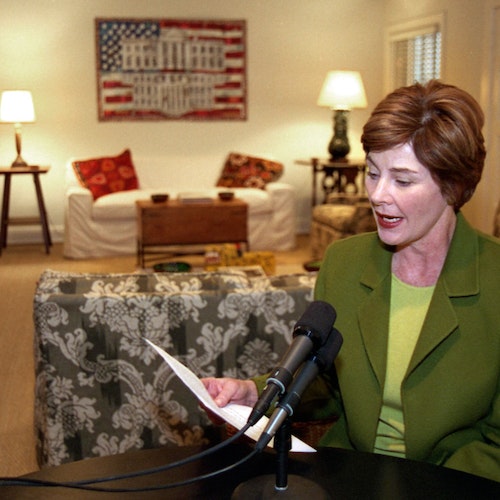 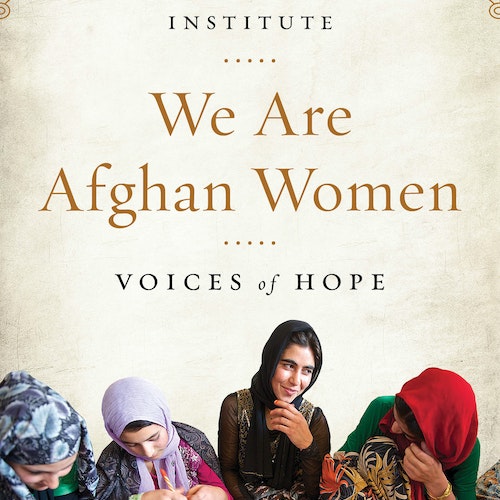 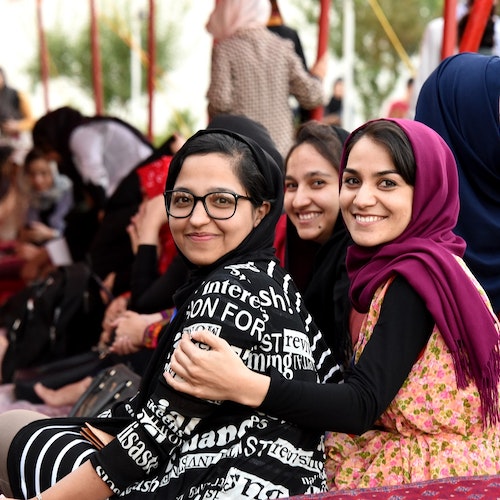 What's at Stake in Afghanistan? It would be a mistake for the U.S. to disengage without a roadmap for peace that protects hard-won gains for women. Learn more