In Afghanistan, the threat of COVID-19 is growing each day, and experts believe one of the biggest challenges could be a lack of access to lifesaving technology. To help, the Afghan Dreamers, a girls’ robotics team, has engineered a ventilator from the engine of a Toyota Corolla.

In Afghanistan, the threat of COVID-19 is growing each day, and experts believe one of the biggest challenges could be a lack of access to lifesaving technology. In response to the governor’s plea for help, Herat Province has gained an ally in the Afghan Dreamers, a girls’ robotics team who has engineered a ventilator from the engine of a Toyota Corolla.

This is not the first time the Afghan Dreamers have defied expectations and stereotypes. Led by their founder and Presidential Leadership Scholar alumna Roya Mahboob, they participated in Washington D.C.’s FIRST Global Robotics Competition in 2017. Out of 162 countries, their visa applications alone were denied – only to be approved after the Afghan Dreamers rallied attention and support on social media. When their construction materials arrived in Afghanistan, the customs officers held them for three months, refusing to release the parts to the team because they were girls. They also faced cultural barriers and prejudices from their own communities.

“Relatives did not understand or support my interest in science, especially because mechanics is such a male-dominated field,” said Fatemah Qaderyan, captain of the 2017 team. Her parents were the only ones to support her, and her father worked to convince other fathers to allow their daughters to travel. Tragically, at the age of 14, Fatemah lost her father in a suicide bombing, claimed by the Islamic State. Adding to the trauma, she was shouldered with the blame. “All our neighbors thought I was the cause of his death,” she said. “They said if I had not been on the robotics team, it would not have happened.”

Overcoming these seemingly insurmountable obstacles, the Afghan Dreamers inspired young women around the world when they returned from the international competition with a silver medal for “courageous achievement”. Now, the Afghan Dreamers have a new team, aged between 14 and 17; captain Somaya Farooqi, Dyana Wahbzadeh, Folernace Poya, Ellaham Mansori and Nahid Rahimi. The girls are working with two emergency ventilator designs. One is a gear-based system (modeled on designs from the Massachusetts Institute of Technology), and another built off the motor of a Toyota Corolla purchased at a local bazaar. With approval from the Health Ministry, they believe their prototypes would cost between $200 – $300 to reproduce, providing desperately needed machines normally sold for around $30,000.

As of March 1st, Afghanistan has 2,335 confirmed cases of COVID-19 and 68 deaths – numbers at risk of being undercounted and exacerbated by the thousands of refugees crossing the border from Iran. According  to the International Organization for Migration, from January 1 through April 11, nearly 243,000 people crossed back into Afghanistan from Iran. Afghanistan’s health minister warned that unless stricter social-distancing measures were enforced, 16 million Afghans could be infected and 110,000 could die. Afghanistan has only 400 ventilators. With their innovation, the Afghan Dreamers hope to help address resource gaps and ensure healthcare workers aren’t faced with devastating choices while treating patients.

While gains have been made since the Taliban was removed from power in 2001, the opportunity to work in science and technology is not common for Afghan girls. As noted in our recent policy paper What's at Stake in Afghanistan?, out of the more than 9 million Afghan children enrolled in school today, around 3.5 million are girls. In 2018, the literacy rate for women 15 years and older was recorded at 30 percent. Expected years of education for girls is nearly a third less than that of boys. In areas that remain under Taliban control, girls are not permitted to go to school past 6th grade.

Education is one of the most effective defenses against child marriage, poverty, and child mortality. Continued engagement is paramount to ensure this invaluable resource is available to young women. With approximately 63 percent of Afghans under the age of 25, when supported with the tools they need, young people offer an incredible resource for progress – especially in the face of crises like COVID-19.

The Afghan Dreamers are evidence that an investment in young women and adolescent girls does not stop there – they will share it with those around them. By supporting a girl, you support a community. It is more important than ever to make women and girls’ access to education a priority, and to ensure their visible and active participation in all levels of society.

Kaitlyn McClew is an Assistant in the Women's Initiative at the George W. Bush Institute.

Series: Profiles from the Frontlines

Ongoing coverage and content that addresses the COVID-19 pandemic and response. View all
Why Dr. Birx and Dr. Fauci are Uniquely Suited to Lead the COVID-19 Response
Q&A: How Guatemala is Faring During the COVID-19 Crisis
Serving Our Country During COVID-19
Veterans, Leadership, and the American Spirit
Helping Corporate Leaders and Military Families Thrive During the Pandemic 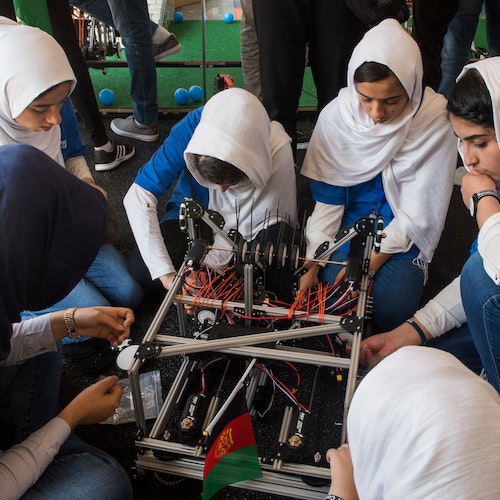 Afghan Girls in Global Robotics Competition are Afghanistan’s Future Over 160 teams are competing this year in the FIRST Global robotics challenge, and Afghanistan’s team has overcome a number of obstacles to be a part of the competition. Read the article