Men: The Missing Piece in the Women’s Empowerment Narrative

Including men at all levels of the conversation, asserts Farah Chouayakh, Women’s Initiative Fellowship 2015 alumna, is the only way to achieve lasting gender equality.

Through my journey to promote women’s rights as a Muslim Tunisian woman, I have discovered an oft-forgotten truth: In order for gender equality to become a reality, men and women must work together collaboratively.

Tunisia is the country that sparked the so-called Arab Spring in 2011 and is probably the only success story left out of that series of revolutions. I pride myself on my Tunisian heritage, and, more importantly, for the championing role that my country plays in the whole region regarding women’s empowerment. Only this year, Tunisian women were officially granted the right to marry outside of the Muslim faith. Yet, this activist spirit is not a recent phenomenon in Tunisia, and that was exactly what drove me to create a YouTube channel entitled “Meet Tunisia.”

Initially, the channel was meant to showcase Tunisian female success stories that would correct the misconceptions surrounding my country, especially of our women. However, through my involvement with the George W. Bush Institute Women’s Initiative Fellowship and numerous women’s rights projects, I saw that there is a missing piece to the puzzle that neither I, nor others, were fulfilling. I came to realize that women’s empowerment circles are doing a great job in exclusively female spaces, for an exclusively female audience, by an exclusively female set of brilliant trainers, educators, coaches, and activists, but are unintentionally being counter-productive to the long-term goals toward gender equality. These circles do indeed empower the female individuals they include, but are not necessarily as equally impactful on a broader level of the patriarchal communities they live in. As long as these circles remain exclusively female, I am afraid women’s rights issues will continue to be inaudible to the men around them, unless men take the initiative to join the battle.

By not including men in the conversation, decades of gender equality progress and real change in mentalities could not be actualized, not to mention the possible side effects like a potential schism between genders and a defensive and alienating attitude developing. I have always believed that gender equality is a global dialogue built in progress that necessitates continuous self-accountability. This is why, as a women’s rights activist, I feel that a better alternative would be inviting men and including them more in the ongoing conversation on gender equality.

I think a healthy model to look at is Canadian Prime Minister Justin Trudeau who created a gender-balanced cabinet and encouraged boys and men to identify as feminists. Equally effective ways of achieving this could be inspired by UN Women’s campaign, HeforShe, that offers a safe space in which men can openly discuss delicate issues. Leaders like Prime Minister Trudeau and campaigns like HeforShe are desperately needed to write a new synchronized and harmonious narrative in gender equality by deconstructing harmful stereotypes of masculinity that limit boys and men.

As a Muslim feminist, I can see the relevance of such an issue even inside my faith. As modern, open Muslims, we need more collaboration and dialogue between both genders in discussing our religion, thinking critically about the sexist interpretations that are now included under the banner of Islam. A good example is the former Islamist and British convert, Adam Deen, who once actively recruited extremists and is now dedicating his life to countering radical and extremist ideologies from within the faith. Additionally, some of the most revolutionary feminist male thinkers that helped shape our modern world today are Tunisian, including Taher Haddad, Kheireddine Pacha, Ibn Abi Dhiaf, and Mohamed Snoussi.

My dream today is to continue their legacy and help foster a spirit of gender cooperation.  Both in order to secure a more peaceful future for my home as well as that of our global community. 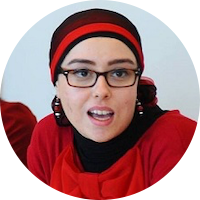 Men: The Missing Piece in the Women’s Empowerment Narrative

Investing In Our Future Natalie Gonnella-Platts on October 11, 2017