Because we know that the health and wellbeing of post-9/11 veterans is often complex, the Bush Institute has asked veterans to explain in their own words what it’s like to experience one or more of these injuries.

We wrap up with Michael Rodriguez, a member of Team 43 Sports, who has participated in the Warrior 100K. He spoke recently with the Bush Institute about how he came to understand the impact of the invisible wounds of war.

I feel blessed to have served for 21 years in the U.S. Army, 15 of which were as a Special Forces Green Beret.  Growing up in southern New Mexico, my first heroes were not comic book figures or TV characters. They were, and continue to be, my father who fought in Vietnam, my grandfathers and my great uncles who fought in World War II.

Their service, quiet humility, professionalism, and continued leadership had an immense impact on me as a child and my career choice.  They weren’t boastful about their experiences. They only spoke with reverence of the men they served with and the people they met.

With less than a year in the Army at the age of 18, I deployed to Somalia in 1993. It was the first of many deployments, and it started my 21-year career and journey.

As a child, I didn’t know that the heroes in my life suffered from PTS and that I was around invisible wounds every day.  I couldn't understand why my heroes were solitary men of few words, yet I never passed judgment.

Webster’s defines stigma as: a set of negative and often unfair beliefs that a society or group of people have about something.  Unfortunately, many of us continue to face the stigma of invisible wounds, in spite of the awareness-raising efforts for PTS and TBI.  Those of us with these invisible wounds are not "broken, crazy,” or “a liability.” We are facing unique challenges and obstacles that can be overcome.  This isn't an issue that only veterans face. Millions of American citizens face similar challenges and stigmas.

Facing PTS and TBI has been the most difficult fight of my life.  I found myself in a war with myself and I wasn’t trained for that combat.

After I made the decision to seek help, I spent a month at the National Intrepid Center of Excellence (NICoE), where I received a diagnosis.  I remember the doctor explaining all 17 of diagnoses and the accompanying treatment plans.  When he got to the last diagnosis of severe PTS, I got angry.  The anger I felt was triggered by the thought of facing my painful memories, everything I was denying or hiding.

I was subsequently hospitalized and began to equip myself for the fight against my invisible wounds, my next mission.  My treatment began with a 4-week stay at an inpatient treatment facility for PTS and chemical dependency.  I ended up staying eight weeks, because I must have needed the extra training.  If it had not been for my U.S. Special Operations Command Care Coalition Advocate, who was also my Battalion Command Sergeant Major at one time, I never would have received help.  I owe that man my life because he is proof that not all lives are saved overseas on a combat deployment.

I grew up playing sports and was very active as a child playing soccer, running or as a young boxer.  I love competition and challenging myself physically, which was one of the reasons I joined the Army.

When I was told I could no longer be a Special Forces Green Beret, I felt lost and alone.  I kept asking myself "What am I now?"  I knew I was a father, husband, friend, and son, but that's not how service members identify themselves.  I fell into a hole of isolation.  One day, my eldest son told me it was okay that I wasn't as fast or strong as I used to be, he still wanted to play with me.  I was crushed because it allowed me to see that while I may not be the same tactical athlete I had been in the Army, that didn't change who I was.

Sports helped me find a piece of my identity I thought I had lost.  I worked very hard to regain my strength, endurance, and speed so I could play with my sons.  The fight to get my physical fitness back fostered fellowship with my veteran community and helped me to reconnect with my family.  Whether I was training to climb one of the seven summits, riding a mountain bike, hitting a heavy bag, or getting crushed by a Crossfit workout, I found a piece of myself.

It's okay to talk about these obstacles.  I always encourage people to keep lines of communication open.  Hiding behind shame will not solve anything.  How do you describe something you cannot see, touch, or quantify?  I think it requires a tremendous amount of patience and personal courage.  You cannot let fear determine how you respond to an issue.  Until you clearly identify an enemy, you will never truly be able to defeat them.

We are part of the greatest nation and fighting force this planet has ever seen.  Take your strengths and apply them towards your future and next mission, continue your leadership and stay in the fight!  We all are vulnerable and need help at times, and you are never alone. 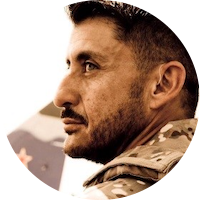