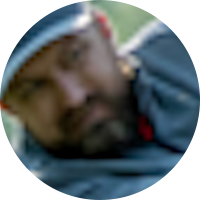 Staff Sergeant Zachariah E. Collett joined the U.S. Army after high school in 2002.  He was assigned to the only Airborne and Air Assault Military Police company in the Army.   In April 2003, Collett deployed to Iraq and served a collective 28 months through 2006.   He returned home with multiple awards and medals for valor and injuries including,Traumatic Brain Injuries, Post-Traumatic Stress, and crushed spinal discs.

Upon his medical retirement, Collett went through multiple surgeries and years of therapy.   He hit rock bottom after falling into addiction to prescription pain medications, abusing alcohol and going through a divorce.  In 2011, with the help of the Wounded Warrior Project, cycling and playing golf, he bounced back.  He worked at the golf course on Fort Bragg while going through recovery and therapy.  He completed an IRONMAN in late 2011 and took part in the Bush Institute’s W100K in 2012.

Collet’s wife, Faryn, is the foundation of his support system and the key to his success.  The Bush Center and Team 43 have been integral in Collett’s successful transition.  In 2015, Collett participated in both the Bush Institute’s W100K and Warrior Open, where he and Faryn have made life-long friends within the Team 43 family.

COllett continues to mentor warriors and veterans on daily.  As an ambassador for The Bush Center, he refuses to be anything other than exceptional.  In 2018, Collett started nursing school with plans of working in trauma upon graduation.