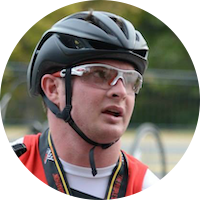 Staff Sergeant Timothy Brown joined the Marine Corps in 2003.  He deployed to Iraq and Afghanistan as a radio operator.  In 2008, he became an Explosive Ordnance Disposal (EOD) Technician.  After two years as an EOD Tech in Japan, Staff Sergeant Brown deployed to Afghanistan again, this time as a member of 1st EOD Company, in direct support of I Co, 3rd Battalion, 5th Marines.

It was on this third deployment that Brown was injured.  After being discharged from the hospital in May 2011, he has since been readmitted 21 times.  Throughout his recovery, Brown has strived to be a mentor to his fellow Wounded Warriors, visiting the newly injured in their hospital rooms and in their daily lives.

Brown took up handcycling in February 2012 to improve fitness in the only way he was able at the time, but it soon became his most important and beloved activity.  In the six months he was able to cycle in 2012, he put well over 1,000 miles on his handcycle, through daily local rides with Ride 2 Recovery's Project HERO program, and completing rides like the BP MS150 Houston-Austin, EOD Warrior Foundation Undefeated LA-San Diego ride, St. Michael's Century, and Ride 2 Recovery Texas Challenge.  He competed in the Detroit Marathon and finished with an official 1:56:44 time and has aspirations of competing in paracycling circuit races.  Brown completed Race Across America (RAAM) as part of an 8-man team comprised of five handcycles and three uprights, finishing with an official time of 7 days, 12 hours, 21 minutes.  He recently started mountain biking when Ride 2 Recovery provided him with a mountain handcycle in September 2013.  In 2014, Brown was selected to ride in the Bush Institute’s W100K.