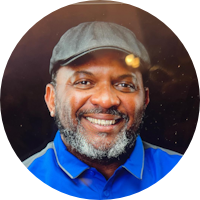 First Sergeant Tony A. Henry is from Christiansted, St. Croix, United States Virgin Islands.  He enlisted in the U.S. Army after high school in 1987.

Henry deployed to Panama in 1989, and to Saudi Arabia in support of Operation Desert Storm and Desert Shield from 1990 to 1991. In 2002 and 2010, Henry deployed to Afghanistan in support of Operation Enduring Freedom.  Over the course of Henry’s deployments as an Infantryman and Paratrooper, he sustained a series of Traumatic Brain Injuries (TBIs) and experiences symptoms of Post-Traumatic Stress (PTS).  Henry was also injured by an Improvised Explosive Device (IED) in 2011, rupturing his right shoulder and tearing his rotator cuff.

Over his 28-year career, Henry served in The Old Guard and conducted many high-profile ceremonies.  Highlights included twelve Presidential arrivals at the White House, Pentagon and U.S. Capitol ceremonies, and he participated in the first inauguration of President Bill Clinton and in the second inauguration ceremony of President Barack Obama in 2013.

Henry earned his associate degree in general studies from Central Texas College and his B.S.  Degree in Sports Medicine and Sports Industry Management from American Military University (AMU).  Henry has a diploma and certification in Fitness and Nutrition from Harcourt Learning Center and is a Certified Fitness Trainer.  He currently resides in Woodbridge, VA.