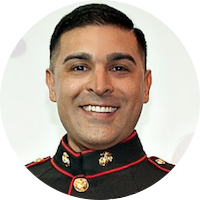 Sergeant Mario D. Alcala enlisted in the U.S. Marine Corps in January 2004.  He served in a variety of units and billets throughout his career. After three deployments, PTS and a benign brain tumor, Alcala was medically retired in 2012.

Alcala first deployed to Fallujah, Iraq in August 2004, where he was involved in Phantom Fury, the bloodiest battle of the Iraq war. After returning from his third deployment, Alcala was diagnosed with a schwannoma brain tumor.  He underwent brain surgery and was assigned to Wounded Warrior Battalion West for transition to retirement in 2012.  Since his retirement, Alcala has been diagnosed with Thyroid cancer that has spread to his lungs. There are no cures available for this type of cancer, but it is manageable.

As a way to exercise during recovery from brain surgery and to help him cope with symptoms of PTS, Alcala took up the game of golf with a local non-profit, Hope For The Warriors.  He is committed to therapy for his PTS through the VA and The Steven A. Cohen Military Family Clinic, playing golf, and keeping up with his peers in the veteran community.

Alcala returned to school after his retirement earning his bachelor’s degree in Communications and master’s degree in Sports Management. Currently, Alcala lives in Carrolton, Texas with his amazingly patient wife of 16 years, Elizabeth.  They have two boys, one currently in the 4th grade and another in the 7th grade.  Alcala is working for the nonprofit that helped him heal when he retired, Hope For The Warriors.