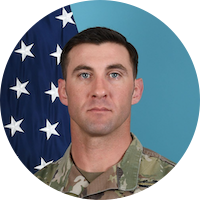 Captain James E. Grady joined the U.S. Army in July of 2002.  After attending Infantry one stop unit training at Fort Benning, GA, he graduated Basic Airborne School and 75th Ranger Regiment Indoctrination Program. Between 2003 and 2007, Grady deployed to combat during his time in 3rd Ranger Battalion on five occasions; three times to Iraq and two times to Afghanistan.  Most notably, James deployed in support of Operation Iraqi Freedom I, conducting an airborne insertion, and helped to successfully seize a strategic airfield in western Iraq.  Later, while assigned to HHC, 75th Ranger Regiment, Grady deployed three more times as a canine handler in support of global contingency operations.

From the deployments, Grady was diagnosed with combat related post-traumatic stress (PTS) in 2015 while in US Army Flight School.  Due to his injuries, he was forced to transfer out of the Aviation Branch and into Transportation Corps to continue his service as a Commissioned Officer.

To combat many of the symptoms of PTS, he realized golfing was an outlet that provided a safe and constructive environment to rehabilitate.  Grady credits the camaraderie from golf outings and the love of his wife to being able to regain the sense of enjoyment and purpose that was once easy to find.

Currently, Grady is assigned to the 75th Ranger Regiment at Fort Benning, GA.  He is married to Robin and they have a daughter, Penelope Monroe and son Aidan Edward.