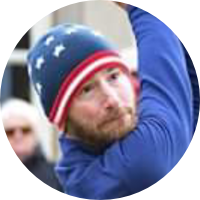 Staff Sergeant Jacob Nelson enlisted in the U.S. Marine Corps in 2002 as an Infantryman.  Between the years of 2002 and 2006, he deployed three times to Iraq while assigned to the 1st Battalion 1st Marines.  In 2006, Nelson re-enlisted and served as a Combat Instructor until 2010.

While assigned to 1st Battalion 5th Marines, Nelson deployed to Afghanistan in 2011.  He was injured by an Improvised Explosive Device (IED) blast.  The explosion resulted in both visible and invisible injuries.

In 2012, Nelson was assigned to Wounded Warrior Battalion West to facilitate his recovery from his multiple deployments.  In 2015, Nelson was medically retired due to his injuries.

During his recovery, Nelson discovered the game of golf.  He realized its healing powers and developed a passion for it.  In 2015, Nelson enrolled in The Golf Academy of America and after graduating was given a job at Taylormade Golf in their fitting facility, The kingdom.  Nelson has since left The Kingdom, but still works as a fitter for TaylorMade in the Dallas area.  He gives back to all veterans in his area and offers free one-on-one fittings.

Currently, Nelson and his family resides in Little Elm, Texas.  He is married to his wife of 17 years, Kristin and they have three children, Eric, Zachary, and Makenzee.