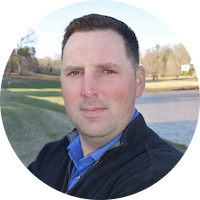 Sergeant First Class Ian Harding joined the U.S. Army in 2003 after graduating high school.  In 2004, he deployed to Iraq.  Following his first deployment, Harding was transferred to Hawaii as a Fire Team Leader and Squad Leader.  Subsequently, he served as a Drill Sergeant at Fort Benning, GA and then as a Platoon Sergeant in Alaska.  Currently, Harding is serving as the 198th Infantry Brigade, Master Trainer.

In 2006, on a night mission in Baghdad, Iraq as the company commander’s Radio Telephone Operator, Harding was injured by small arms fire.  For his service, he is the recipient of many honors, including Purple Heart, Bronze Star, Combat Infantryman Badge, Expert Infantryman Badge, Distinguished Order of Saint Maurice, and became a member of the Distinguished Sergeant Audie Murphy Club.

Golf has been a part of Harding’s life since he was ten years old.  He once aspired to be a professional golfer, but now uses golf as a method to relieve the stress of the daily military grind and keep competitive.  Harding’s five-year old son, Preston, enjoys golfing with his dad and dreams of joining the Army to fly helicopters.

Harding is working towards his bachelor’s degree in business management.  He and his wife, Stacy, have been married for 12 years.  The family have made Ft. Benning, GA their current home.