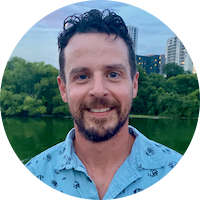 Sergeant Glenn Miller enlisted in the U.S. Marine Corps in August 2001 as an Infantryman.  His first deployment was to the Philippines in 2002.  Miller’s unit conducted security and fire support for both combat and humanitarian missions in a region heavily influenced by terrorist groups.  In 2004, Miller was deployed to Fallujah, Iraq.

While conducting security patrols in the region south of Fallujah, Miller’s vehicle and his team came under enemy mortar fire.  A round landed less than a yard from the rear of his vehicle.  The blast left Miller briefly unconscious, with no visible wounds.  Miller continued that mission and was part of the main assault force during the second Battle of Fallujah in November 2004.

In 2005, Miller was honorably separated from Marine Corps.  He was subsequently diagnosed with a Traumatic Brain Injury (TBI) and Post-Traumatic Stress (PTS).  Over the next several years, he struggled with different forms of therapy, which didn’t seem to work.  Despite his challenges, Miller maintained full-time employment while completing his Bachelors' in Finance and Master's in Accounting.

In 2015, Miller got married and was given his first set of golf clubs.  From the first swing, he was hooked. Golf has taught him immeasurable self-control and personal awareness.  Over the years, golf has become the avenue Miller uses to reach out to other struggling veterans.

Currently, Miller resides in Austin, Texas, with his wife, Ashley and their three children.  He continues to pursue a fulfilled life through family, golf, and personal connections within his community.