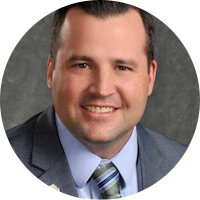 Schneck has four combat deployments. The first to Iraq to provide Combat Search and Rescue support to special forces operations. His next three deployments were to Afghanistan where he flew CASEVAC and saved hundreds of lives on the battlefield.

Previously, Schneck taught at the United States Air Force Weapons School in Las Vegas, NV. He entered the Air Force in 2006 as a distinguished graduate from the Air Force Reserve Oﬃcer Training Corp program at Texas Tech University. He is a weapons oﬃcer and instructor/evaluator pilot with over 1700 hours in rotary wing aircraft to include the UH-1H, TH-1 and HH-60G. Schneck has over 2100 total hours across fixed and rotary wing aircraft.

Schneck is currently a Financial Advisor for Edward Jones Investments, located in Borger, TX. He is also a trustee of the Borger Independent School District School Board. He is excited about the transition from military service to community service.

Schneck was raised in Borger, TX. He is married to Laura Schneck, and they have four children: Rylee, Madison, Guy, and Sadie.