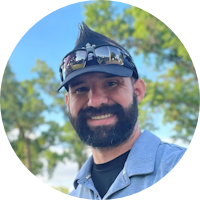 Sergeant Davin Dumar joined the U.S. Army in 2005 after attending one year of community college.  Dumar deployed to Iraq from 2005 – 2006 as a Driver and Rifleman.  In 2008, he deployed again to Iraq, this time as a Sniper and Vehicle Commander.

Two months into the 2011 Afghanistan deployment, Dumar was severely wounded during an ambush by the Taliban.  During a dismounted patrol, Dumar was hit with a large Improvised Explosive Device (IED).  The blast resulted in his left leg being amputated above the knee, a Traumatic Brain Injury (TBI), and Post-Traumatic Stress (PTS).

Dumar spent months at Walter Reed during his recovery.  He feels lucky to be a single amputee, not a triple.  Dumar’s right arm was damaged beyond complete repair, and he lost most of the muscle in his right hamstring.  In 2014, he was medically retired from the Army and received a Purple Heart.

After Dumar’s retirement, Dumar struggled with depression.  One day, he found himself buying a set a golf clubs and meeting a person, Devin, who would help him in his recovery and transition.  The game of golf lifted Davin out of his depression.  It continues to help him feel a sense of confidence and escape.  He is grateful for the game of golf and for his best friend, Devin, who is also his caddie during tournaments.

Davin is active in the Michigan Amputee Golf Association and resides in Macomb, Michigan.