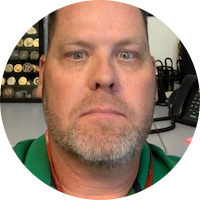 Gunnery Sergeant Worbington joined the Marine Corps in 1993.  He served with 3/7 and during his career deployed several times. Worbington was medically retired after more than 22 years of faithful service on June 29, 2015.

During the deployment to Afghanistan in 2012, Worbington was exposed to seven Improvised Explosive Device (IED) strikes. The first strike left him with a mild Traumatic-Brain Injury (TBI) and vision issues.  Subsequent blasts resulted in many concussions and more TBIs. After the second Medevac in the same deployment, Worbington returned to the U.S. for extensive treatment for his TBI and optic nerve damage to his right eye. The IED blast had led to an aneurysm in his aortic root, and in 2013, Worbington had an aortic root replacement as well as an aortic valve replacement. He is still receiving treatment for his TBI. For his injuries, Worbington was awarded the Purple Heart and is the recipient of many medals and accommodations.

In 2015, Worbington medically retired after 22 years of service. For his injuries, Worbington was awarded the Purple Heart and is the recipient of many medals and accommodations.

Since 2016, Worbington has been working as a federal contractor with the United States Air Force Predator/Reaper Program in Poway, California.  He has two children, Cody and Belle.