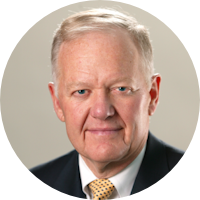 Ray L. Hunt is Executive Chairman of Hunt Consolidated, Inc.  His association with Hunt Oil Company began in 1958 when he joined as a summer employee in the oil fields.

Hunt also serves on the boards of directors of Bessemer Securities Corporation and King Ranch, Inc.

He is a past member of the board of directors of the American Petroleum Institute, and he previously served as president of the Dallas Petroleum Club and the Dallas Wildcat Committee.

In October 2001 and again in January 2006, Hunt was appointed by President George W. Bush to the President’s Intelligence Advisory Board, where he served until January 2009.

In 1998 Hunt was appointed to the board of directors of the Federal Reserve Bank of Dallas, where he also served as chairman from 2002 to 2006.   Additionally, he is a member of the National Petroleum Council (an industry organization that advises the Secretary of Energy) and served as its chairman from June 1991 to July 1994.

Hunt has received many energy industry awards.  In 2010 he was the inaugural recipient of the L. Frank Pitts Energy Leadership Award, given by the Southern Methodist University Cox School of Business and the Maguire Energy Institute “to an individual who exemplifies a spirit of ethical leadership and innovative impact on the energy industry.”  In 2009 he received the American Petroleum Institute Gold Medal for Distinguished Achievement.  In 2007 he received the Distinguished Service and Leadership Award of the 25-Year Club of the Petroleum Industry.

Additionally, he received the Public Service Award of the Society of Petroleum Engineers, the Distinguished Service Award for the Texas Oil and Gas Association, and a Lifetime Achievement Award from the North Texas Energy Council.

In 1988 Hunt was elected an All-American Wildcatter by the national organization of the same name, and in 1989 the Southwestern Legal Foundation gave him the John Rogers Award – “for distinguished service to the petroleum industry and civic institutions.”

Other awards Hunt has received include the Greater Dallas Chamber of Commerce’s Erik Jonsson Award and the Woodrow Wilson Center for International Studies Award for Corporate Citizenship. In 2007 Hunt received the Dallas Morning News’ Linz Award.

In 1965 Hunt graduated from Southern Methodist University, where he was designated a distinguished scholar, with a degree in economics.