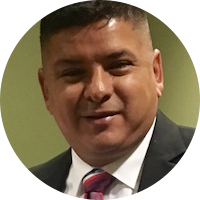 Sergeant First Class Ramon Padilla-Munguia was born in Tijuana, Mexico and at the age of two, came to the U.S.  With the help of his mentors from the El Monte Police Department, Padilla-Munguia enlisted in the U.S. Army in 2000.  From 2005 - 2006, he was deployed to Iraq and upon his return, reenlisted to serve with the 173rd Airborne Brigade Combat Team in Vicenza, Italy.

In May 2007, Padilla-Munguia deployed to Korengal Valley, Afghanistan.  Forty-five days into that deployment, his firebase was attacked.  The attack resulted in the loss of Padilla’s lower left arm and gunshot wound to the head. After two and a half years at Walter Reed, Padilla was medically retired.

In 2010, Padilla was blessed with the birth of his fifth child.  Shortly after, he began working for the Joint Chiefs of Staff at the Pentagon, where he continues to work today.  He and his family reside in the Washington, D.C. Metro area.