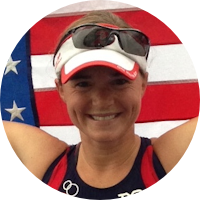 Melissa Stockwell graduated from the University of Colorado in 2002 and was commissioned as a Second Lieutenant in the United States Army as part of the Transportation Corps.  Two years later she deployed with the 1st Cavalry Division to Baghdad, Iraq.  On April 13, 2004, Stockwell was on a routine convoy when her HUMVEE was hit by a roadside bomb.  The blast resulted in the amputation of her left leg above the knee and she became the first female to ever lose a limb in active combat.

After a year of rehab at Walter Reed Army Medical Center, Stockwell was medically retired with a Purple Heart and a Bronze Star.  She quickly adapted into a life of sports and went on to swim in the 2008 Beijing Paralympics before turning to the sport of triathlon in 2009.  Stockwell is a 3x Paratriathlon World Champion and a recent bronze medalist from the 2016 Rio Paralympics. Stockwell loves giving back to the multisport community and is the co-founder of the Chicago based Dare2tri Paratriathlon club where she helps get other athletes with disabilities into the sport of triathlon. She currently serves on the USAT Womens Committee and is a trustee with the USAT Foundation.

Currently, Stockwell travels the nation for her career as a motivational speaker.  Companies such as General Motors, BP, the Chicago Bears, Coldwell Banking, Deloitte and many more, have praised her speech as “inspirational, unforgettable and leaving the audience wanting to better every aspect of their life.”  In 2015, she gave a TEDx talk in Vail and brought the crowd to their feet.

Stockwell is a proud above the knee amputee, a proud American and proudly lives a life of sport. She feels she has done more in her life with one leg than she ever would have done with two.

She is married to her husband, Brian, and together they have their son, Dallas Patrick, and their daughter Millie Lynn.  Stockwell has dreams of making it to one more Paralympic Games in Tokyo in 2020.