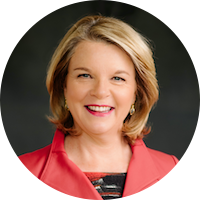 Prior to that, Ms. Spellings served in a variety of positions in the Bush Administration.

She served as U.S. Secretary of Education from 2005 to 2009. In that role, she oversaw an agency with a nearly $70 billion budget and more than 10,000 employees and contractors. As a member of the President’s Cabinet, she led the implementation of the No Child Left Behind Act (NCLB), a historic national initiative to provide enhanced accountability for the education of 50 million U.S. public school students.

In 2005, Ms. Spellings launched a higher education national policy debate and action plan to improve accessibility, affordability and accountability in our Nation’s colleges and universities. Ms. Spellings initiated international outreach and collaboration by leading delegations on behalf of the President of the United States as well as overseeing the development and implementation of international education agreements with such countries as China, Russia and the United Arab Emirates.

Prior to her service in the White House, Ms. Spellings was senior advisor to then-Governor George W. Bush of Texas, led governmental and external relations for the Texas Association of School Boards, and has served in key positions at Austin Community College and with the Texas Legislature.

She graduated from the University of Houston with a bachelor's degree in political science.